Islam was founded by a man claimed to be illiterate and who, to the end of his life, claimed to be demon-possessed; he broke almost every promise he ever made except when he stated, “I will bring you slaughter.” That promise he kept. He looted; raided; raped; tortured;

Would you like to take a look in your own backyard?

The 2000 Olympic Games in Sydney were universally recognised as an overwhelming success. 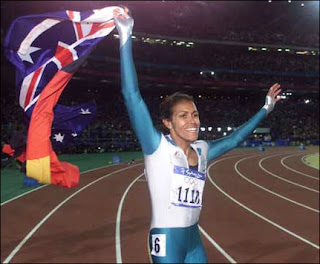 The Australian heroine from start, when she carried the Olympic torch into the stadium, to finish, as she crossed the line to take 400m gold, was the indigenous athlete Cathy Freeman.
Against the will of many of her still oppressed people, she came to represent the symbol, albeit shallow, of reconciliation between White Australia and Aboriginal Australia. But the frenzy of flames and fireworks surrounding the Games blinded the rest of the world to the darker side of a land down under... 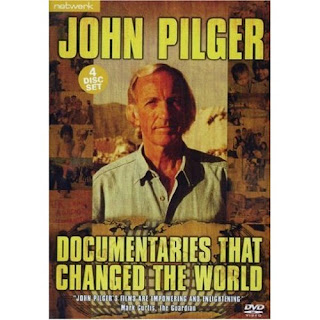 In 1999, John Pilger returned home to find that the elaborate preparations for the Games overshadowed a hidden world where Aborigines continue to live in Third World conditions. He revealed that some of the greatest sportsmen and women in the world were in fact Aboriginal.

Many of them, like blacks in South Africa under Apartheid, were until recently denied a place in their country's Olympic teams. He also found that the Australian Government was in the process of overturning the landmark legislation of 1992 which finally recognised Aborigines as people with common law rights before the English colonised the country.

"In 1987, a sensational "discovery" was made by a Sydney University team, led by Australia's most celebrated pre-historian, Professor D J Mulvaney. They reported that the Australian population in 1788 was 750,000, or three times the previous estimate. They concluded that more than 600,000 people had died as result of white settlement."

Aboriginal life expectancy for males is around 56.9 years, compared with 75.2 years for the rest of the population, and 61.7 years for females, as compared to 81.1 years. The death rates for Aborigines aged 35-54 are, comparatively, the worst—around 6-8 times higher than for their non-Aboriginal counterparts. 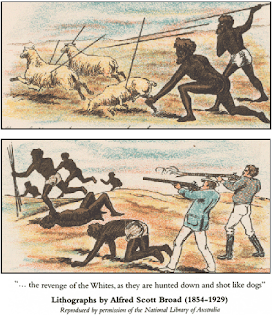 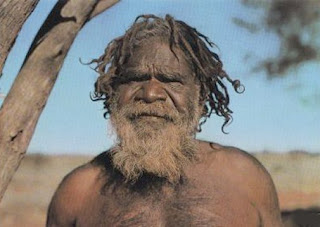 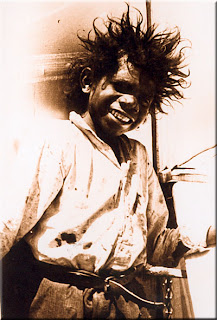 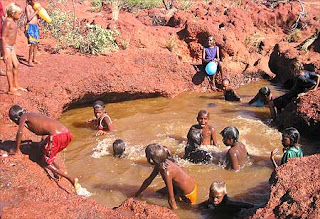 “Killing members of the group”

The report states: “In 1803, Tasmania was settled. In 1806 serious killing began. In retaliation for the spearing of livestock, Aboriginal children were abducted for use in forced labour, women were raped and tortured and given poisoned flour, and the men were shot. They were systematically disposed of in ones, twos and threes, or in dozens, rather than in one systematic massacre. In 1824, settlers were authorised to shoot Aborigines. In 1828, the Governor declared martial law. Soldiers or settlers arrested, or shot, any blacks found in settled districts.

Vigilante groups avenged Aboriginal retaliation by wholesale slaughter of men, women and children. Between 1829 and 1834, an appointed conciliator, George Robinson, collected the surviving remnants: 123 people whom were then settled on Flinders Island. By 1835, between 3,000 and 4,000 Aborigines were dead.” And further: “They were killed, with intent, not solely because of their spearing of cattle or their 'nuisance' value, but rather because they were Aborigines.”

Between 1824 and 1908 approximately 10,000 Aborigines were murdered in the Colony of Queensland. “Considered ‘wild animals', ‘vermin', ‘scarcely human', ‘hideous to humanity', ‘loathsome' and a ‘nuisance', they were fair game for white ‘sportsmen'.”

The upshot of this slaughter was the appointment in 1896 of Archibald Meston as Royal Commissioner. In his Report on the Aborigines of North Queensland he wrote:

“The treatment of the Cape York people was a shame to our common humanity.” He continued: “Their manifest joy at assurances of safety is pathetic beyond expression. God knows they were in need of it”.

Aboriginal people met him “like hunted wild beasts, having lived for years in a state of absolute terror”.

His prescription for their salvation lay in “ strict and absolute isolation from all whites, from predators who, in no particular order, wanted to kill them, take their women, sell them grog or opium”. Needless to say, none of the perpetrators of the slaughter were made to answer for their actions. 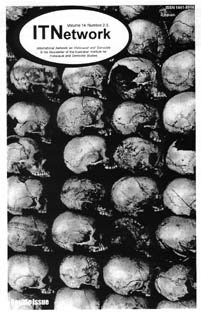 "If those are not your values, if you want a country which has Sharia law or a theocratic state, then Australia is not for you," he said on national television.

The Courier-Mail found the notes in the State Archives while investigating claims by historian Keith Windschuttle who released a book last year denying claims of widespread slaughter of Tasmanian Aborigines. The personal reports of Sub-Inspector Frederick Urquhart who rose to become Queensland Police Commissioner from 1917 to 1921, show Aboriginal men, women and children were slaughtered on his orders after the death of a white pastoralist.

He led native police in what is reputedly Australia's biggest massacre of Aborigines -- the 1884 Battle Mountain attack on Kalkadoon people in northwest Queensland.

Historian Robert Armstrong in his book The Kalkadoons estimated 600 Aborigines assembled on the crags of Battle Mountain and about 200 were killed by the carbines of Urquhart's police.

The number of dead is disputed, but historian Professor Geoffrey Blainey once noted: "A tribe was slaughtered in such numbers that for decades a hill was littered with bleached bones of warriors, gins and piccaninnies. "

The Urquhart reports refer to "dispersal" of Aborigines, a term of the era for killing.

As early as 1804 the British began to slaughter, kidnap and enslave the Black people of Tasmania. The colonial government itself was not even inclined to consider the aboriginal Tasmanians as full human beings, and scholars began to discuss civilization as a unilinear process with White people at the top and Black people at the bottom. To the Europeans of Tasmania the Blacks were an entity fit only to be exploited in the most sadistic of manners--a sadism that staggers the imagination and violates all human morality. As UCLA professor, Jared Diamond, recorded:

"Tactics for hunting down Tasmanians included riding out on horseback to shoot them, setting out steel traps to catch them, and putting out poison flour where they might find and eat it. Sheperds cut off the penis and testicles of aboriginal men, to watch the men run a few yards before dying. At a hill christened Mount Victory, settlers slaughtered 30 Tasmanians and threw their bodies over a cliff. One party of police killed 70 Tasmanians and dashed out the children's brains."

Not a single European, however, was ever punished for the murder of Tasmanian Aborigines

The way the criminal justice and penal systems function makes Aborigines particularly vulnerable to cruel, inhuman and degrading treatment. The high rate of Aboriginal deaths in custody is also due to the dramatically disproportionate representation of Aboriginal people in detention. If you are an Aboriginal teenager in Australia today, you are 18 times more likely to end up in jail or in juvenile detention than your non-Aboriginal peers, Mr Schurmann-Zeggel said.

Alleged ill-treatment by police officers has been reported to the Amnesty International delegation almost daily since it arrived in the country. The delegates were also told that police continue to intimidate and harass relatives who do not accept official explanations about deaths in custody and instead have called for further investigations. The Amnesty International team reported that some prisoners have been kept in leg-irons, handcuffs and chains for up to 24 hours a day and over a period of several days.

Deaths in custody and imprisonment of Aborigines

Aborigines continued to die in custody in disproportionate numbers, sometimes in disputed circumstances.

In January, the controversial death in custody of a 15-year-old Aboriginal boy in Darwin heightened public interest in a Senate inquiry into mandatory imprisonment schemes for juveniles. The inquiry found that the schemes violated the UN Children's Convention and recommended the passing of draft federal legislation overriding such schemes. The Prime Minister prevented the passing of the draft legislation. In March, the CERD recommended changes to the schemes which ''appear to target offences that are committed disproportionately by indigenous Australians, especially in the case of juveniles''.

The HRC observed in July that such schemes raised a ''serious issue of compliance'' with the ICCPR. In November, the Committee against Torture recommended measures to prevent such schemes violating international standards. The Committee also expressed concerns about reported ill-treatment of prisoners, including the use of unnecessarily painful and humiliating restraint instruments. In June, a Coroner's inquest in Tasmania found that prison authorities had failed in their duty of care to prisoners at risk of suicide, following repeated inquest recommendations since 1991 to improve safety at Risdon prison, Hobart. The Tasmania state government introduced extensive prison reforms, including in prison health services, to halt a spate of prison deaths.

On 16 December 1997 the Australian Federal Government announced its formal response to the recommendations made in a landmark report by the national human rights commis- sion, Bringing Them Home: National Inquiry into the Separation of Aboriginal and Torres Strait Islander Children from Their Families [1], published in May 1997. The three-year so-called "stolen children" inquiry investigated evidence of the removal from their families, "by compulsion, duress or undue influence" (terms of reference), of tens of thousands of indigenous children under past government policies effective up to 1970. The inquiry also examined the ongoing effects of these policies, including current juvenile justice issues, and reported on the physical and sexual abuse of removed children. The findings suggest that the experience of grave violations of human rights suffered by many of these children are among the unresolved causes of Amnesty International' s long standing concerns about the human rights problems faced by Aborigines in Australia [2].

then Australia is not for you," he said on national television. Costello said.

The Aboriginals first settled the Australian continent 40,000 years ago. Aboriginals also use the names Korris, Murris, Noongars and other tribal and clan names. The aboriginal way of life came to an end with the beginning of European settlement in 1788, when the British landed on the east coast of Australia. The diseases brought in by the white settlers (smallpox, colds and measles) killed almost half the aboriginal population between Botany Bay and Broken Bay. The settlers were mostly male, and the rape of aboriginal women by them was a frequent occurrence. During the nineteenth and twentieth centuries most of the coastal and eastern Australian tribes were annihilated in violent confrontations with white settlers. The remaining Aboriginals often worked on the cattle stations in near slavery conditions. The aboriginal population decreased from an estimated one million in 1788 to about 30,000 in the 1930’s.