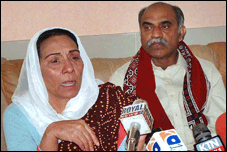 ISLAMABAD: In a bitter row within the Pakistan People’s Party over awarding party tickets for reserved women’s seats, Nahid Khan, the political secretary to Benazir Bhutto, has withdrawn her nomination papers in protest over the awarding of a PPP ticket to Farahnaz Ispahani. According to party sources, Nahid Khan was not happy with the award of the party ticket to Farahnaz Ispahani, the wife of Hussain Haqqani, and has informed Benazir Bhutto about withdrawing her nomination papers saying she cannot sit in the National Assembly with Ms Ispahani. Naheed Khan was nominated for a reserved seat from the Punjab while Farahnaz Ispahani was nominated from Sindh. Prior to marrying Farahnaz Ispahani, Hussain Haqqani was married to Naheed Khan’s sister. That could be the reason why Ms Khan did not want to sit with Ms Ispahani in the National Assembly. The News tried to contact Nahid Khan for comments but failed to reach her,as there was no response from her cell phone. However, PPP spokesman Farhatullah Babar confirmed that Nahid Khan has withdrawn her nomination papers for the National Assembly seat. “When I asked her about it she told me that she has a lot of party work and cannot do justice to parliamentary work so it is better to work for the party,” he said, quoting Nahid Khan.
Story of Naheed Khan & Safdar Abbasi - Part 7

Babar said, “Nahid Khan also told me that the withdrawal of her nomination papers did not mean that she has any complaint against the PPP and that she remained committed to Benazir Bhutto and the party.” Babar maintained that Nahid Khan is 100 per cent committed to the party and to Benazir Bhutto. “She not only accompanied BB to Quetta on Saturday but has also proceeded to Karachi along with her. We all are at Bilawal House and there is no question of differences or protest on her part,” he responded. Farhatullah Babar further said that Nahid Khan would continue to be with Benazir Bhutto during her election campaign and other engagements in Pakistan. “Nahid told me that she would not be able to discharge responsibilities as BB’s political secretary while being member of the National Assembly.” But PPP insiders were positive that Naheed Khan’s decision was an expression of her displeasure over awarding the PPP ticket to Farah Ispahani. Moreover, she was also believed to be unhappy at reports in the top PPP circles that Hussain Haqqani himself was going to become a senator on a PPP ticket at the first available opportunity.
Story of Naheed Khan & Safdar Abbasi - Part 10

Analysts in Islamabad say Nahid Khan’s refusal to be a member of the NA was probably the first sign that she was losing her formidable clout with Benazir Bhutto. Her husband, Senator Safdar Abbasi is, however, one of the closest advisers to the PPP Chairperson. They say if Naheed Khan has actually opted out of politics because of Mr Haqqani, then it would be a political rebuff to Benazir from one of the closest people around her after recent shocks from many others. Seen in the context of some diehard PPP leaders and supporters breaking ranks with Benazir, it would put the chairperson in an awkward situation. After the shocking decisions of former interior minister General Naseerullah Babar not to accept a PPP ticket, defiance shown by the popular Atizaz Ahsan to withdraw his nomination papers, the recent open letters by former spymaster Masood Sharif, Naheed Khan’s decision would be another road bump. Ms Nahid Khan’s decision will be welcomed by many PPP leaders and workers as she was considered by some to be the ultimate human barrier between them and Benazir Bhutto. Her decision was a shock for many. Even Farhatullah Babar, supposed to be the most informed man in the PPP, was not initially aware of it when he was contacted. REFERENCE: Upset Nahid Khan opts out of polls By Rauf Klasra, Asim Yasin & Dilshad Azeem Monday, December 17, 2007, Zill-Haj 6, 1428 A.H. http://thenews.jang.com.pk/top_story_detail.asp?Id=11771 http://www.pakistanileaders.com.pk/tnewsinds.php?id=1039

LAHORE: Important questions on the sequence of events that led to the assassination of Pakistan’s first woman prime minister and leader of the Pakistan Peoples Party (PPP) Benazir Bhutto were raised in the Point Blank programme hosted on Express News by anchor Mubasher Lucman on Wednesday. Senator Safdar Abbasi, who was the guest on the show, was asked who had opened the hatch through which Bhutto raised her head and exposed herself to her assassins. Abbasi replied he did not remember but speculated that bodyguard Khalid Shehenshah “might have done so.” He refuted the possibility that the driver or someone next to Bhutto could have opened the hatch as this was not possible.
Story of Naheed Khan & Safdar Abbasi - Part 1

Abbasi also denied that he had slowed the progress of the cavalcade as it left the grounds of Liaquat Bagh by taking the microphone and raising slogans on which party supporters gathered around Bhutto’s vehicle. Programme anchor Lucman commented that it was the slowing of the vehicle and the opening of the hatch that eventually led to the attack on the former premier. Giving details of the seating in the vehicle, Abbasi said that his wife Naheed Khan and PPP leader Amin Fahim sat on either side of Bhutto. In the rear of the vehicle, he along with Khalid Shahenshah and an attendant, Razzaq, shared the seat. In the front, the security chief sat alongside the driver. Abbasi said that there was firing before the suicide bomb attack. “I don’t know who opened the hatch of the vehicle. It was not my responsibility. It may have been opened by Khalid Shehenshah,” he said. Lucman told Abbasi that it was his raising of slogans that slowed the movement of the vehicles but Abbasi replied that the mike was handed to him by Ms Bhutto herself to raise party slogans. Abbasi recalled that it was when these slogans were being raised that Ms Bhutto raised her head through the hatch to acknowledge party supporters. Two shots were fired from the left side following which Ms Bhutto tried to sit down and at the same moment a blast took place in which Ms Bhutto hit her head on the latch, said Abbasi.
Story of Naheed Khan & Safdar Abbasi - Part 3

He also said that the video shows the firing came from the left side and “this may not have hit her. Which bullet hit her remains a mystery.” Anchor Lucman also told Abbasi that his wife, Naheed Khan, was in constant touch with the authorities and it was they who said that a post mortem not be done. But Abbasi denied this and said Naheed Khan was in no position to rule out a post mortem. On the issue, Abbasi said that the family of Ms Bhutto, specifically Mr Zardari, should have had the post-mortem done or the police should not have released the body without doing the post-mortem. Abbasi also said that allegations against him and his wife, Naheed Khan, were false. “There were no investigations by Ms Bhutto against me or my wife.” The anchor also called party member Akhlaq Guddu during the programme who alleged that Ms Naheed Khan had taken Rs10 lakh from him (Guddu) to have a party seat awarded. “I was supposed to pay Rs5 lakh more. I am ready to swear on the Holy Quran that this is what happened.” Abbasi said this was a false charge but clearly stuttered as he said this. Abbasi said that Naheed Khan’s party ticket was not cancelled by Ms Bhutto. “Naheed had withdrawn it,” he revealed. REFERENCE: Benazir Bhutto assassination: Who opened the hatch and slowed the vehicle? Published in The Express Tribune, December 23rd, 2010. http://tribune.com.pk/story/93535/benazir-bhutto-assassination-who-opened-the-hatch-and-slowed-the-vehicle/
Naheed Khan and Safdar Abbasi in Meray Mutabiq - 17th April 2010 - Part 1

ISLAMABAD: Close associates of late Benazir Bhutto, Dr Safdar Abbasi and Naheed Khan, had sent a secret message to the Zardari House to contradict a report in The News about a shocking perception that they, along with Amin Fahim, were responsible for her assassination. But there has been no response after almost a week. The couple had sent the messageÊlast Sunday but the Zardari House was yet to issue a contradiction of the report as demanded by Dr Safdar Abbasi and Naheed Khan. When contacted by The News, the Information Secretary of the PPP, Sherry Rehman, said she had no idea about the message or something like that. However, unlike Naheed and Abbasi, Amin Fahim did not send any message to the Zardari House. He, however, gave his own reaction to The News to incorporate it in the main story. MAF was of the view that this was totally ridiculous to think that any one of them sitting besides Benazir was responsible for her martyrdom. MAF said they were risking their lives by traveling with Benazir, knowing well that she was the target of suicide bombings. MAF had pointed out that he used to sit on one side of Benazir and Naheed Khan on the other, so that they should be hit first and not Benazir Bhutto.ÊÊ It is believed that this wild and laughable allegation, which was to be made public by a PPP senator at some point in the near future, was aimed at defusing the desperate campaign of MAF to become the prime minister.
Story of Naheed Khan & Safdar Abbasi - Part 4

However, the leakage of this plan is said to have killed it as no one in the ranks of the party was ready to believe the involvement of the three top lieutenants of Benazir Bhutto in her assassination. Earlier, soon after the publication of the shocking story, Dr Safdar Abbasi, the spouse of Naheed Khan, had sent a message to Asif Ali Zardari that the PPP should contradict a report published in The News last week that there was a strong perception in the camp of Zardari that Naheed Khan, Amin Fahim and Safdar Abbasi were responsible for the killing of Benazir Bhutto. Safdar had conveyed through the messenger that if the contradiction was not issued, then he would use his right to defend himself in the media. The news of the alleged implication of Naheed and Dr Safdar had come as a big shock not only for the spouse but also for the rest of the party leaders.ÊSources close to Dr Safdar Abbasi confirmed to The News that he was shocked to read the story attributed to some sources in the ranks of the PPP close to Asif Zardari. He was not ready to believe that such kind of perception could take roots within the party. This disbelief is said to have convinced him to send a message to the Zardari House. Courtesy: The News, 21/3/2008.

URL: http://www.youtube.com/watch?v=AzH9z_9GNEU&feature=channel
Posted by Aamir Mughal at 11:52 AM