What else would you "Expect" from The Nation & NawaiWaqt.

ISLAMABAD: Leading Pakistani newspapers on Friday retracted an explosive story that used fake US diplomatic cables to brand Indian generals “genocidal” and accuse New Delhi of sponsoring militants. The News claimed on Thursday that cables released by WikiLeaks showed Indian spies were supporting Islamist militants in Pakistan’s northwest tribal region of Waziristan and the southwestern province of Balochistan. Datelined from Washington, the newspaper said how US diplomats thought of one Indian general as “incompetent” and a “geek”, and of another as “self-obsessed, petulant and idiosyncratic” and “barely tolerated” by subordinates. It likened another to late Serbian strongman Slobodan Milosevic “with regard to butchering Muslims through war crimes” in Indian-held Kashmir. But on Friday The News wrote, “On further inquiries, we learnt from our sources that the story was dubious and may have been planted.” The News said the report originated from some local websites “known for their close connections with certain intelligence agencies”. A variety of Pakistani newspapers carried the report on Thursday, crediting the story to the Islamabad-based Online news agency, where a receptionist on Friday refused to put through telephone calls from AFP to senior editors. Another English language daily also published a front-page retraction, saying it “deeply regrets publishing this story without due verification and apologises profusely for any inconvenience”. REFERENCE: Pak papers retract fake WikiLeaks report Saturday, December 11, 2010 http://www.thenews.com.pk/TodaysPrintDetail.aspx?ID=19834&Cat=2

In the December 9 edition of The Express Tribune, a report was published on page 8 under the caption “WikiLeaks: What US officials think about the Indian Army”. It now transpires that the story, which was run by a news agency, Online, was not authentic. The Express Tribune deeply regrets publishing this story without due verification and apologises profusely for any inconvenience caused to our valued readers. UK-based newspaper Guardian published a report on this issue, which is being printed for our readers. REFERENCE: Pakistani media: Fake WikiLeaks cables attacking India published December 10, 2010 http://tribune.com.pk/story/88268/pakistani-media-fake-wikileaks-cables-attacking-india-published/

KARACHI: I was deeply disappointed with your paper and myself for being taken for a ride by what, on second thoughts, should have been seen as an obvious piece of disinformation. I refer, of course, to the fake WikiLeaks documents purporting to be cables from the American Embassy in New Delhi published in your paper’s issue of December 9. Although, it seems, that The Express Tribune and I were not the only ones to have been so duped there is no gainsaying the fact that better and more intrusive investigation may have revealed them to have been fake. To that extent we were both remiss. As the article bearing my name in December 10’s issue of your paper was prompted entirely by what these fake cables contained, and which now turn out to have been palpably false, I would like you to publish this retraction and to convey to your readers my unreserved apologies. Zafar Hilaly Published in The Express Tribune, December 11th, 2010. http://tribune.com.pk/story/88546/an-apology-for-my-readers/
AND The Nation & NawaiWaqt has to say this on "Fake Leaks" 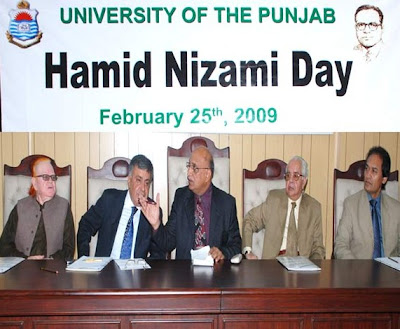 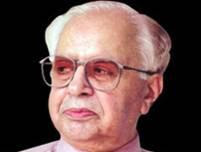 Washington’s hypocrisy did not end at the borders of Pakistan Occupied Kashmir. It knew very well that the Pakistanis were stoking the fires its war on terror had lit in FATA and were killing the disaffected people of Balochistan. Cables received from its officials testified to their involvement in these troubled regions. However, the Americans never tried to pull up its real strategic partner to save it from public humiliation. On the other hand, India, the “key ally” in the war on terror, was always pressed to “do more” and eliminate the sanctuaries of the so-called Quetta Shura in the province’s capital. Besides, WikiLeaks’ evidence confirms that the US has hardly been serious in eradicating terrorism; for its functionaries in Pakistan had termed the Islamic militant groups – ISI and its ilk – which were working in unison with the Pakistani army, even more lethal than Al-Qaeda and the Taliban. Yet, one does not recall hearing any criticism of, or planning action against, them from Washington. REFERENCE: India’s true face Published: December 10, 2010 http://www.nation.com.pk/pakistan-news-newspaper-daily-english-online/Opinions/Editorials/10-Dec-2010/Indias-true-face
عارف نظامی برطرف
علی سلمان
بی بی سی اردو ڈاٹ کام ، لاہو
Wednesday, 9 September, 2009, 23:52 GMT 04:52 PST
http://www.bbc.co.uk/urdu/pakistan/2009/09/090908_arif_nizami.shtml
نظامی خاندان کی عدالتی جنگ شروع
عبادالحق
بی بی سی اردو ڈاٹ کام، لاہو
منگل, 24 نومبر, 2009, 14:08 GMT 19:08 PST
http://www.bbc.co.uk/urdu/pakistan/2009/11/091124_arif_nizami_notice_zee.shtml

BREAKING: A group of 21 international media organizations has written a letter to Minister of Information and Broadcasting Qamar Zaman Kaira expressing concern about The Nation. The letter is in response to an article by Kaswar Klasra in The Nation earlier this month that – with no evidence or factual support – accused a fellow journalist of being a spy. This group letter to the Minister comes following public condemnation from Committee to Protect Journalists and an appeal from the editor of The Wall Street Journal. The letter is signed by Editors from ABC News, Agence France-Presse, Associated Press, The Guardian, BBC, The Independent, CNN, Al Jazeera, The Economist, Financial Times, Los Angeles Times, France Info, McClatchy Newspapers, National Public Radio, Reuters, The New York Times, TIME, Newsweek, The Times, Radio France Internationale, and The Wall Street Journal. http://pakistanmediawatch.com/2009/11/17/breaking-21-international-media-organizations-write-to-government-about-the-nation/ Playing the spy card against WSJ in Pakistan By Joel Simon/Executive Director http://cpj.org/blog/2009/11/playing-the-spy-card-against-the-wall-street-journ.php
The letter reads as follows: 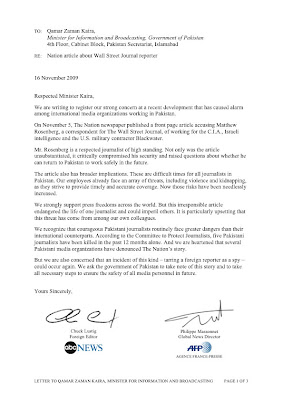 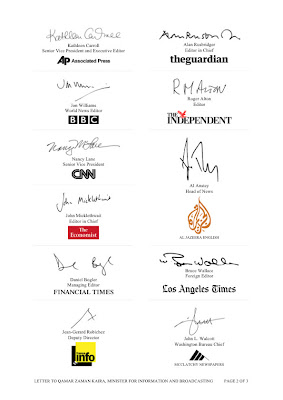 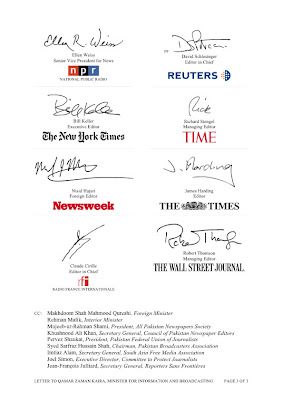