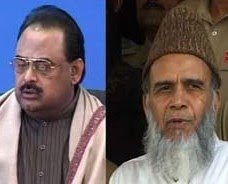 KARACHI/LONDON: The Chief of Muttahida Qaumi Movement (MQM) Altaf Hussain and the Amir of Jamaat-e-Islami (JI) Syed Munawar Hasan talked on telephone and discussed various issues Monday. Historically, it has happened first time that the leaders of both arch rival parties have contacted through phone and agreed to work with each other for the betterment of the country and its security. Altaf Hussain appreciated JI's rally held on Sunday (yesterday) against the Reformed General Sales Tax, unemployment and inflation. REFERENCE: SAMAA MQM, JI chiefs talk on phone Upadated on: 21 Dec 10 12:13 AM http://www.samaa.tv /News29086-MQM_JI_chiefs_talk_on_phone.aspx
Tuesday, December 21, 2010, Muharram 14, 1432 A.H
http://www.jang.com.pk/jang/dec2010-daily/21-12-2010/main.htm

LAHORE, July 6: The Jamaat e Islami chief, Syed Munawar Hasan, has said that the writ of the government in Karachi has been eroded because of the MQM’s terrorism. He was talking to the family members of JI member( Rukn) Mubinul Haq, who lost his life at the hands of the MQM terrorists in Faisalabad colony, Karachi. Syed Munawar Hasan said that the MQM’s inclusion in the government had emboldened the terrorists who were moving about freely and the law and order in the port city had been shattered. The residents of the mega city had become hostages in the hands of a few terrorists, he added. He condemned PPP government’s inaction against the MQM due to political expediency and said this was a matter of deep concern for the entire nation. He said even the PPP was afraid of MQM backlash in case the MQM was dropped from the government. He asked the PPP leadership if it had bartered away the lives of the people for its rule. He deplored that the port city which earned 70 per cent revenue for the country, was in the grip of target killing and the national economy was being ruined under a conspiracy. Syed Munawar Hasan paid homage to Mobinul Haq for his steadfastness on the path of righteousness and said Mobin had lost his life while fighting against the forces of evil and his sacrifice won’t go waste. The father of the deceased, Zamirul Haq, speaking on the occasion, said that the terrorists could not cow down the JI workers who were struggling for an Islamic revolution which was the destiny of this country. REFERENCE: JI chief condemns MQM’s terrorism http://www.smunawar.com/2010/07/ji-chief-condemns-mqms-terrorism.html
MQM Haider Abbas Rizvi on "Duniya In-session" Hypocrisy of Jamat-e-Islami Exposed Part 1


ISLAMABAD: One of the top security agencies on Wednesday picked up Raja Ehsan Aziz, a member of Tehrik-e-Islami (TI), for his alleged connections with terrorists who had attacked the Parade Lane Mosque in Rawalpindi and Moon Market in Lahore. Tehrik-e-Islami is a splinter group of the JI. Two female members of the Tehrik have already been taken into custody. Sarwat Wahid, another female member whose son's car was used in the Parade Lane Mosque attack, is missing. Also her son, Jawad, who was studying in Faisalabad after doing A Level from Beacon House School System, is missing. Aziz, a graduate of Columbia University who also served on senior positions at the Foreign Office, is a retired professor of International Relations, Quaid-i-Azam University. His elder son is an Army doctor. Aziz was taken away from his house in G/10-3 on Wednesday evening by sleuths of the Counter-Terrorism Cell, his wife Amira Aziz told The News. Amira, an ex-MNA of Jamaat-e-Islami and now a Shura member of the Tehrik, is a religious scholar and writes columns in an Urdu daily. Aziz's driver, Phool Zeb from Nowshera, has already been arrested as investigators found a mobile SIM allegedly used for conversation during the attacks on the Parade Lane Mosque and Moon Market, was issued in his name. Likewise, the car used in the mosque attack belonged to Jawad, the son of a Tehrik-e-Islami woman, Sarwat Wahid, a resident of I-8 Sector, Islamabad. Both of them are missing since then. Likewise, Aziz' son, Omer, a student of Islamic International University, has not returned home for the last five days.
Kamran Khan & GEO TV says that Jamat-e-Islami is involved in Terrorism.


Aziz has been picked up for the second time, his wife said, denying any links of the family with terrorism incidents. “I’m a sworn enemy of America and can pay any price for it but I strongly oppose terrorism within Pakistan,” Amira Aziz told The News. She said the intelligence operatives had been following the women activists of Tehrik-e-Islami for the last six months and harassed them. She alleged that her husband was beaten black and blue when picked up last time and kept in illegal custody for a night. Amira said her son, Omer, a heart patient, was very upset when intelligence guys kept his father in their custody for a night. A female member of Tehrik, Najma Sana, who lives in G-9/1, is already in the agency’s custody for the last 10 days. Sarwat Wahid, after being chased by the intelligence agency, left Islamabad for Karachi where she was again pursued by the police. Her sister and children in Karachi have been arrested to press for recovery of Sarwat who has gone underground there. Sarwat’s son, Jawad, is also missing. Tahira Mumtaz, another female member of the Tehrik, was twice called for investigation over her alleged assistance to Sarwat to flee the capital. Altaf Aziz Khattack, SHO, said he was not aware of any such incident. He asked this correspondent to take up the matter with the R A Bazaar police in whose jurisdiction the mosque was attacked. When contacted, officials of the concerned police station said that they had not arrested Ehsan Aziz, adding the Army was investigating the attack and the matter may be taken up with them. The DG ISPR could not be contacted. REFERENCE: JI splinter group leader, females held for links to suicide attackers Friday, December 18, 2009 By Umar Cheema http://thenews.com.pk/daily_detail.asp?id=214063
Posted by Aamir Mughal at 5:09 AM