KARACHI: A delegation of the Muttahida Qaumi Movement (MQM), led by Senator Babar Khan Ghouri, called on Pakistan Muslim League-Functional (PML-F) chief Pir Pagara to discuss the problems facing the country including poverty, inflation, unemployment, lawlessness and worsening economy at Kingri House on Tuesday. Addressing reporters after the meeting, Babar Ghouri said his party was working to develop mutual understanding with other political forces in order to resolve lingering and pressing problems of the country. He said combined efforts were needed to steer the country out of political and financial crises. He said the political contacts of his party demonstrate its belief in democratic principles. The delegation of MQM headed by Senator Babar Ghouri comprised of Member Coordination Committee Wasey Jalil, MPA Syed Sardar Ahmed and Sindh Minister Adil Siddiqui. Sindh Minister and PML-F leader Imtiaz Shaikh were also present. Babar Ghouri said the meeting with Pir Sahab Pagara was aimed to strengthen political relations among parties, following the agenda of MQM Chief Altaf Hussain. He said it was the need of the hour to take all democratic forces on board for the solution of prevailing crises in Pakistan. He said some vested interests were hatching conspiracies in Sindh to create political rifts between democratic forces so as to perpetuate their nefarious designs. PML-F and other patriotic forces would foil them, he added. —PPI REFERENCE: MQM leaders hold talks with Pagara in Karachi, Baloch in Lahore Wednesday, December 22, 2010 http://www.thenews.com.pk/TodaysPrintDetail.aspx?ID=2838&Cat=13&dt=12/22/2010 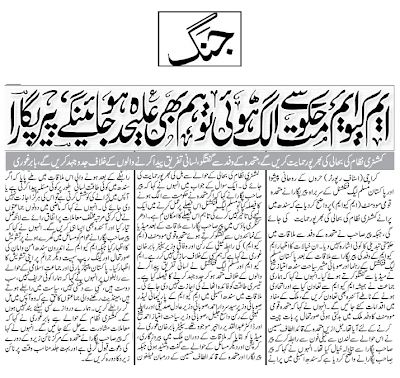 
NNI adds: Babar Ghauri said the MQM was not hatching conspiracies against anybody nor have any such schemes. He said: “We have no rivals. All are friends and we haven’t shut our doors to anyone”. APP adds from Lahore: The Jamaat-e-Islami and the MQM on Tuesday discussed the current political situation and agreed that all political parties should strive to meet the challenges confronting the country. This was stated by MQM Deputy Convenor Dr Farooq Sattar and JI Secretary General Liaqat Baloch while talking to the media at Mansoora after a meeting. MQM parliamentarians Haider Abbas Rizvi, Iqbal Muhammad Ali, Shaheen Gilani, and JI Deputy Secretary General Dr Farid Piracha were also present.Farooq Sattar said both parties had common stand to make efforts to bring the country out of crises for the sake of national solidarity and sovereignty. Dr Farooq Sattar appreciated the JI stance to oppose feudalism and initiating pro-people politics to overcome poverty and price hike.The MQM leader also stressed the need for ignoring the past differences between the two parties and said his party wanted to remain in touch with the JI for common goals in the larger interest of the country. Liaqat Baloch agreed with the MQM leader that the two parties should be in touch with each other in the larger interest of the country. Baloch added the JI was ready to join hands with all political forces on the agenda of providing relief to the common man and the national security. REFERENCE: MQM leaders hold talks with Pagara in Karachi, Baloch in Lahore Wednesday, December 22, 2010 http://www.thenews.com.pk/TodaysPrintDetail.aspx?ID=2838&Cat=13&dt=12/22/2010 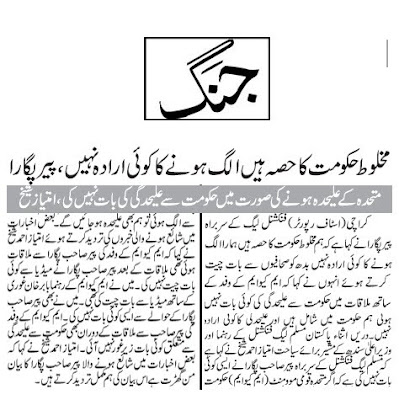