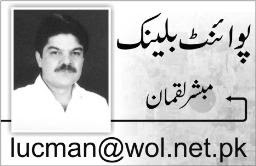 In 2009 I used to work for Express News TV as a Researcher and I was asked by the Executives to provide Question for General Pervez Musharraf which I did and now watch the Intellectual Dishonesty of this Loudmouth Braggart i.e. Mubashir Lucman and compare the question which I had sent with proper references and see for yourself how "soft" Mubashir Lucman was on a "Military Dictator" and compare the same Mubashir Lucman's program with any "Elected Representative" and you may note that he not only misbehave rather put the guest in embarrassing position [shame on our Politicians who accepts insults from a two bit TV Anchor]. Such Interviews should be called "Press Conferences" Compare the questions which were sent and watch what Mubashir asked! REFERENCE: Alleged Trial of General Pervez Musharraf!
http://chagataikhan.blogspot.com/2009/07/alleged-trial-of-general-pervez.html Real & Ugly Face of Express News Group & GEO/Jang. http://chagataikhan.blogspot.com/2010/10/real-ugly-face-of-express-news-group.html 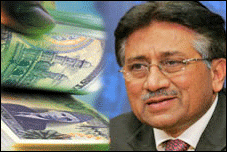 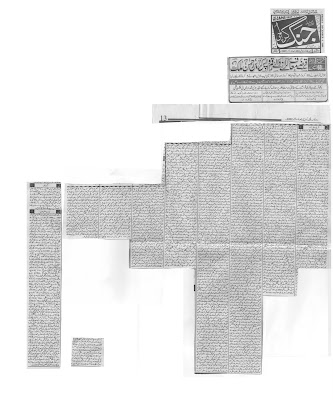 ISLAMABAD: The main wheeler and dealer of the ISI during the 2002 elections, the then Maj-Gen Ehtesham Zamir, now retired, has come out of the closet and admitted his guilt of manipulating the 2002 elections, and has directly blamed Gen Musharraf for ordering so. Talking to The News, the head of the ISI’s political cell in 2002, admitted manipulating the last elections at the behest of President Musharraf and termed the defeat of the King’s party, the PML-Q, this time “a reaction of the unnatural dispensation (installed in 2002).” Zamir said the ISI together with the NAB was instrumental in pressing the lawmakers to join the pro-Musharraf camp to form the government to support his stay in power. Looking down back into the memory lane and recalling his blunders which, he admitted, had pushed the country back instead of taking it forward, Zamir feels ashamed of his role and conduct. Massively embarrassed because he was the one who negotiated, coerced and did all the dirty work, the retired Maj-Gen said he was not in a position to become a preacher now when his own past was tainted.
DAWN News TV Investigation Report with Masood Sharif – 6th January 2008 http://www.sharifpost.com/2008/01/06/dawn-news-tv-investigation-report/
DAWN 1
[NOTE: Hamid Gul admits that ISI political role was pre Bhutto DAWN News TV Investigation Report with Masood Sharif -- 6th January 2008]


He said the country would not have faced such regression had the political management was not carried out by the ISI in 2002. But he also put some responsibility of the political disaster on the PML-Q as well. The former No: 2 of the ISI called for the closure of political cell in the agency, confessing that it was part of the problem due to its involvement in forging unnatural alliances, contrary to public wishes. Zamir’s blaming Musharraf for creating this unnatural alliance rings true as another former top associate of Musharraf, Lt-Gen (retd) Jamshed Gulzar Kiyani has already disclosed that majority of the corps commanders, in several meetings, had opposed Musharraf’s decision of patronising the leadership of the King’s party. “We had urged Musharraf many times during the corps commanders meeting that the PML-Q leadership was the most condemned and castigated personalities. They are the worst politicians who remained involved in co-operative scandals and writing off loans. But Musharraf never heard our advice,” Kiyani said while recalling discussions in their high profile meetings.
DAWN 2
[NOTE: Hamid Gul admits that ISI political role was pre Bhutto DAWN News TV Investigation Report with Masood Sharif -- 6th January 2008]


He said one of their colleagues, who was an accountability chief at that time, had sought permission many times for proceeding against the King’s party top leaders but was always denied. Kiyani asked Musharraf to quit, the sooner the better, as otherwise the country would be in a serious trouble. Ma-Gen (retd) Ehtesham Zamir termed the 2008 elections ‘fairer than 2002’. He said the reason behind their fairness is that there was relatively less interference of intelligence agencies this time as compared to the last time. But he stopped short of saying that there was zero interference in the 2008 polls. “You are quite right,” he said when asked to confirm about heavy penetration of ISI into political affairs during the 2002 elections. But he said he did not do it on his own but on the directives issued by the government. Asked who directed him from the government side and if there was somebody else, not President Musharraf, he said: “Obviously on the directives of President Musharraf.” Asked if he then never felt that he was committing a crime by manipulating political business at the cost of public wishes, he said: “Who should I have told except myself. Could I have asked Musharraf about this? I was a serving officer and I did what I was told to do. I never felt this need during the service to question anyone senior to me,” he said and added that he could not defend his acts now.
DAWN 4
[NOTE: Hamid Gul admits that ISI political role was pre Bhutto DAWN News TV Investigation Report with Masood Sharif -- 6th January 2008]


“It was for this reason that I have never tried to preach others what I did not practice. But I am of the view that the ISI’s political cell should be closed for good by revoking executive orders issued in 1975,” he said. Responding to a question regarding corruption cases that were used as pressure tactics on lawmakers, he said: “Yes! This tool was used, not only by the ISI. The NAB was also involved in this exercise.” Former corps commander of Rawalpindi, Lt-Gen (retd) Jamshed Gulzar Kiyani said majority of corps commanders had continued opposing Musharraf’s alliance with top leadership of the PML-Q. “Not just in one meeting, we opposed his alignment with these corrupt politicians in many meetings but who cared. Now Musharraf has been disgraced everywhere, thanks to his political cronies.” REFERENCE: The man, who rigged 2002 polls, spills the beans By Umar Cheema Sunday, February 24, 2008 http://www.thenews.com.pk/TodaysPrintDetail.aspx?ID=13159&Cat=13&dt=2/24/2008

"QUOTE"
Physical Harassment aganist Maheen Usmani at Dunya TV
By Sabahat Ghazal A senior anchorperson at Dunya TV News is being pressured to keep silent about being physical  harassed by the company’s managing director. After the news director and chief executive officer (CEO) of the company were informed the journalist started to experience serious professional setbacks, and though internal investigation committees were set up (after her resignation), these appear to have been intentionally delayed.