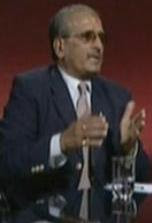 ISLAMABAD: The senior leadership of the Pakistan Muslim League-Nawaz (PML-N) and close associates of Nawaz Sharif have asked him not to provide support to the incumbent administration of Asif Ali Zardari since the government of the Pakistan People’s Party (PPP) has lost its image and credibility in the masses. It is understood that the Muttahida Qaumi Movement (MQM) and Jamiat Ulema-e-Islam Fazl (JUI-F) have gained in the eyes of the people after parting ways with the government. Keeping in view the impression, close confidants of Nawaz Sharif and senior leaders of the PML-N have impressed upon him to stay away from any move that could infer as support for the incumbent administration since it has become a sign of corruption.
Muhammad Saleh Zaafir & Jang Group Hate Muhajirs, Altaf Hussain and MQM.


Wiki Leaks Memo on MQM & MQM's "Confusion" over AL-QAEDA. http://chagataikhan.blogspot.com/2011/05/wiki-leaks-memo-on-mqm-mqms-confusion.html  Wiki Leaks Memo on "Karachi Killings"! http://chagataikhan.blogspot.com/2011/05/wiki-leaks-memo-on-karachi-killings.html
The people at large feel that now the present government stands for misrule, lawlessness, corruption and dearness. Supporting the government would mean supporting the price-hike, poor governance, corruption and chaos. The government has brought in unprecedented and unbearable dearness and all sorts of social evils. The poor and rich are distressed alike on account of the situation, the PML-N leaders have warned their chief.
Intellectual Dishonesty of Kamran Khan (GEO TV) on Nawaz Sharif.


Well-placed parliamentary sources told The News here on Sunday that the leaders of the PML-N are of the view that Nawaz Sharif has some clandestine understanding with Asif Zardari. The impression is highly detrimental for the PML-N because it is believed that cases against Nawaz Sharif and his close aides are pending in the National Accountability Bureau (NAB) and the cases have not been opened due to this reason. Once they part ways, Nawaz Sharif and his companions could be exposed to brunt of such cases.
Kamran Khan & Shaukat Aziz discussing Saudi - Nawaz Sharif Deal.


The party leadership advised their leader that supporting the PPP would be taken as animosity with the people and whosoever would adopt this path will drown. The support of Nawaz Sharif for Asif Zardari has been seen with anger by the people in the backdrop of increasing incidents of suicides, closure of business houses, flight of capital and worsening law and order situation. REFERENCE: Why is Nawaz backing Zardari? By Muhammad Saleh Zaafir Monday, January 03, 2011 http://www.thenews.com.pk/TodaysPrintDetail.aspx?ID=3085&Cat=13&dt=1/3/2011
Posted by Aamir Mughal at 5:12 PM