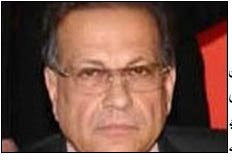 Administering Justice and awarding punishment is the responsibility of the Ruler/State [even in the harshest Islamic State] not of the Masses or Mullahs. A detail view is as under for kind perusal. I guarantee you that those who have done the above deed would also have been the most ignorant about Islam, Quran and Shariah.
Thursday, January 06, 2011, Safar 01, 1432 A.H
http://jang.com.pk/jang/jan2011-daily/06-01-2011/u58312.htm 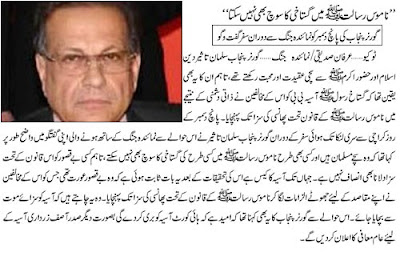 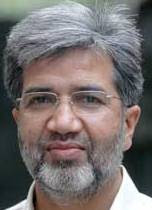 Now read what The News International "Extremist Mullah Ansar Abbasi" file in The News and Watch what the GEO TV Relay and Telecast all over the world and do note the "Un-Islamic Clothes of Sana Buccha" and it is further mentioned here that Islam doesn't allow woman to show their face to the whole world. ISLAMABAD: While a select group continues to demand the abolition of blasphemy law, the Lahore High Court only recently, while confirming the death penalty of yet another blasphemy convict, has upheld the death sentence for a blasphemer in the light of Quran and Sunnah. Decided by a division bench of the LHC headed by Justice Ijaz Ahmed Chaudhry, the next Chief Justice of the Lahore High Court, and comprising Justice Sh. Ahmad Farooq, the LHC ruled, “There is no denial to the proposition that the Holy Quran enjoins the Muslims to hold the last beloved Prophet of Allah (PBUH) dearer than themselves and their kith and kin and this is also strengthened by the Ahadiths that is why the law of the land has suggested the death penalty in such like cases.”
Lekin - 5th January 2011 Part 1


The judgment, handed down on October 29 this year, also said, “To constitute offence under Section 295-C, P.P.C. number witnesses are not required and it is not necessary that such abusive language should be made loudly in public or in a meeting or at some specific place, but statement of single witness that somebody had made utterance for the contempt of the Holy Prophet (PBUH) even inside the house is sufficient to award death penalty to such contemner.”
Lekin - 5th January 2011 Part - 2

The case pertained to the criminal appeal of one Raja Wajihul Hassan, a convert Qadiani, against his conviction by an additional districts and session judge, Lahore, who punished him with death sentence for writing letters to religious scholar and Advocate Muhammad Ismail Qureshi with fictitious names containing blasphemous remarks against the Holy Prophet (PBUH) and his companions (RA). The trial court, besides seeing the investigation conducted by the police, had taken the handwriting specimen of the accused and sent the letters received by Ismail Qureshi to the handwriting expert. The expert verified that the specimen of writing of accused and letters received by Ismail Qureshi had similar characters. The accused didn’t deny making threatening and contemptuous calls to Ismail Qureshi.
Lekin - 5th January 2011 Part 3

According to the judgment, the accused appellant had taken a specific stand of his false implication in the instant case on his refusal to admit that the letters in question were in fact written by Asma Jahangir but the appellant failed to produce any evidence in support of his aforesaid plea. The judgment said that the burden of proof to prove the story narrated by the appellant in the statement under Section 342 Cr.P.C was heavily laid upon him and non-production of evidence by the appellant in support of his defence plea would rather strengthen the prosecution evidence as the appellant himself admitted the manner of his meeting with both the prosecution witnesses who narrated the story of extrajudicial confession.
Capital Talk 5th January 2011


“The statement of both the aforesaid witnesses of extrajudicial confession made by the appellant are supported by the statement of the complainant, statement of expert who verified the handwriting of the letters to be that of the accused-appellant whereas the defence plea taken by the accused-appellant is not supported by any other corroborative piece of evidence, as such, the same cannot be given preference over the inspiring,” the judgment said. The judgment also reflects that the contemner Wajih initially worked in the office of senior advocate Asma Jahangir and later joined a steel industry company.
Capital talk - 5th january 2011


In his statement, the convict had claimed that he and his father were working in the office of Asma Jehangir’s husband but after sometime he left the said office and joined a steel industry. He claimed that he was forced to admit that the letters were written by Asma Jehangir. Upon refusal, he said, he was taken to Allama Iqbal Town police station where Ismail Qureshi was present. He accused Qureshi of having a grudge against Asma Jehangir and said that the motive was to lodge an FIR against Asma Jehangir and her sister Hina Jillani.
Capital Talk 5th January 2011


The court, however, observed that the prosecution successfully proved the guilt of the accused through reliable, cogent and inspiring confidence evidence, which is available on record in the shape of letters written by the convict and the handwriting expert has declared the said writing to be that of the appellant (convict); that all the prosecution witnesses have fully established guilt of the appellant through their statements and the appellant has not been able to point out any enmity, ill will or grudge against the witnesses, as such, the learned trial court has rightly convicted and sentenced the appellant. REFERENCE: LHC ruling upholds validity of blasphemy law Tuesday, November 30, 2010 By Ansar Abbasi http://www.thenews.com.pk/TodaysPrintDetail.aspx?ID=2384&Cat=13&dt=11/30/2010
Capital Talk 5th January 2011

ISLAMABAD: Law Minister Babar Awan has categorically said that no one should think of repealing the blasphemy law. “In my presence as the Law Minister, no one should think of finishing this law,” he said while declaring himself to be a “Shaheen” (eagle). He was talking to a senior member of the Jang Group on Thursday. The minister came out with these unequivocal remarks in the wake of the latest media debate over the blasphemy laws, which started once again by the recent award of a death sentence to a Christian woman on blasphemy charges. The categorical stance by Minister Awan, arguably one of the closest aides of President Zardari and one with a role in many controversies, is in direct contradiction to that taken by Governor Punjab Salmaan Taseer, who while being critical of the same law is all out to secure the release of Aasia Masih, sentenced to death by a district and sessions court of Nankana Sahib in the Punjab. Taseer has already declared that the convict was innocent and according to observers his view is shared by many commentators who in a majority of cases may not even have gone through the details of the evidence and judgment.
Capital Talk 5th January 2011