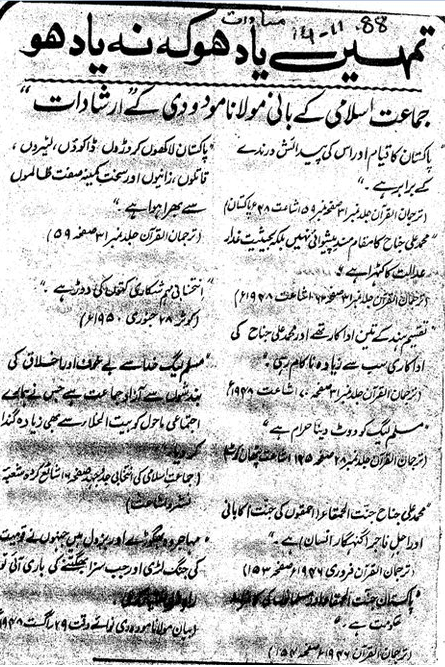 With Book Reference "Dawat O Irshad of Mawdudi - Mawdudi, Jamat-e-Islami, Democracy, Jinnah and Pakistan??? The Jamat-i-Islami was also opposed to the idea of Pakistan which it described as Na Pakistan (not pure). In none of the writings of the Jama’at is to be found the remotest reference in support of the demand for Pakistan. The pre-independence views of Maulana Abul Ala Maududi, the founder of the Jamat-i-Islami were quite definite:

“Among Indian Muslims today we find two kinds of nationalists: the Nationalists Muslims, namely those who in spite of their being Muslims believe in Indian Nationalism and worship it; and the Muslims Nationalist: namely those who are little concerned with Islam and its principles and aims, but are concerned with the individuality and the political and economic interests of that nation which has come to exist by the name of Muslim, and they are so concerned only because of their accidence of birth in that nation. From the Islamic viewpoint both these types of nationalists were equally misled, for Islam enjoins faith in truth only; it does not permit any kind of nation-worshipping at all. [Maulana Maududi, Nationalism and India, Pathankot, 1947, p-25]
Farooq Haider Mawdudi & Professor Shariful Mujahid in Frontline - 2


Maulana Maududi was of the view that the form of government in the new Muslim state, if it ever came into existence, could only be secular. In a speech shortly before partition he said: “Why should we foolishly waste our time in expediting the so-called Muslim-nation state and fritter away our energies in setting it up, when we know that it will not only be useless for our purposes, but will rather prove an obstacle in our path.” [Reference: The Process of Islamic Revolution, 2nd edition, Lahore 1955, p-37]
Farooq Haider Mawdudi & Professor Shariful Mujahid in Frontline - 3

Paradoxically, Maulana Maududi’s writings played an important role in convincing the Muslim intelligentsia that the concept of united nationalism was suicidal for the Muslims but his reaction to the Pakistan movement was complex and contrad...ictory. When asked to cooperate with the Muslim League he replied: “Please do not think that I do not want to participate in this work because of any differences, my difficulty is that I do not see how I can participate because partial remedies do not appeal to my mind and I have never been interested in patch work.” [Reference: Syed Abul Ala Maududi, Tehrik-i-Adazi- e-Hind aur Mussalman] (Indian Freedom Movement and Muslims), pp 22-23]

He had opposed the idea of united nationhood because he was convinced that the Muslims would be drawn away from Islam if they agreed to merge themselves in the Indian milieu. He was interested more in Islam than in Muslims: because Muslims ...were Muslims not because they belonged to a communal or a national entity but because they believed in Islam. The first priority, therefore, in his mind was that Muslim loyalty to Islam should be strengthened. This could be done only by a body of Muslims who did sincerely believe in Islam and did not pay only lip service to it. Hence he founded the Jamat-i-Islami (in August 1941). However, Maulana Maududi’s stand failed to take cognizance of the circumstances in which the Muslims were placed at that critical moment. [Reference: Ulema in Politics by Ishtiaq Hussain Qureshi , p-368]
Several Leading Founding Fathers of Jamat-e-Islami i.e. Late. Maulana Manzoor Naimani, Masood Alam Nadvi, Mawlana Wahiduddin Khan [alive and over 80 in Azam Garh UP India] resigned from Jamat-e-Islami due to Mawdudi’s Wrong Interpretation o...f Islam [Ref: Meri Rafaqat Ki Sargazasht - Mawdudi Kay Sath Meray Shab o Roz by Late. Manzoor Naimani and Taabeer Ki Ghalti [a critique on Mawdudi's Islamic Politics and Methodology] by Mawlana Wahiduddin Khan. After partition several leading JI Leaders quit Jamat-e-Islami because Mawdudi/Jamat-e-Islami had decided to enter Politics [Parliamentary Politics/Democracy based on Secular Principle] those who Left after Machi Goth Congregation were Amin Ahsan Islahi, Irshad Ahmed Haqqani and Dr. Israr Ahmed.


In my opinion Pakistan can only be run peacefully if it is to be run et all then it must be run through an Strictly Secular Constitutional System otherwise be prepare for another Yugoslavia of 90s, Lebanon of 70s and 80s or latest Iraq. Those who claim that Jinnah wanted an Islamic State should know about Jinnah that he was an Ismaili [in his early life as per the record of Bombay High Court] and then converted to Shiaism [as per Sindh High Court Record more references are given at the end with excerpts from a books].
Just assume that Pakistan is going to be an Islamic State [in a literal and real sense] then what School of thought will govern the country [just imagine the mess Deobandis hates Barelvis, Shia and Wahaabis, Wahaabis hate Deobandis, Barelvis, Shias, Barelvis hates Deobandis, Wahaabis but they dont hate Shia as much above all if Jamat-e-Islami is allowed to run then all those mentioned above hate Jamat-e-Islami to extreme].
We are in a soup for big time. Assume that Jinnah wanted Theocratic Country then it would have been a Rafizi Pakistan. I am posting the entire history below read and you all decide tha should Pakistan be run on Secular Ideology or Islamic Ideology? I vote for Strictly and Pure Secular Pakistan.
LATE. MR JINNAH’S RELIGION:

The most noteworthy feature of the struggle for Pakistan is that its leadership came almost entirely from the Western-educated Muslim professionals. The Ulema remained, by and large, hostile to the idea of a Muslim national state. But during the mass contact campaign, which began around 1943, the Muslim League abandoned its quaint constitutionalist and legalist image in favor of Muslim populism which drew heavily on Islamic values. Wild promises were made of restoring the glory of Islam in the future Muslim state. As a consequence, many religious divines and some respected Ulema were won over.[2]
The Muslim political leadership believed that the Ulema were not capable of giving a correct lead in politics to the Muslims because of their exclusively traditional education and complete ignorance of the complexities of modern life. It, therefore, pleaded that the Ulema should confine their sphere of activity to religion since they did not understand the nature of politics of the twentieth century.
Deobandis are Anti-Pakistan - Part - 2


It was really unfortunate that the Ulema, in general and the Darul Ulum Deoband in particular, understood Islam primarily in a legal form. Their medieval conception of the Shariah remained unchanged, orthodox and traditional in toto and they accepted it as finished goods manufactured centuries ago by men like (Imam) Abu Hanifa and Abu Yusuf. Their scholasticism, couched in the old categories of thought, barred them from creative thinking and properly understanding the problems, social or philosophical, confronting the Muslim society in a post-feudal era. They were intellectually ill-equipped to comprehend the crisis Islam had to face in the twentieth century. [3]
The struggle for Pakistan -- to establish a distinct identity of Muslims -- was virtually a secular campaign led by men of politics rather than religion and Mohammad Ali Jinnah and his lieutenants such as Liaquat Ali Khan who won Pakistan despite opposition by most of the Ulema.
Jinnah was continuously harassed by the Ulema, particularly by those with Congress orientation. They stood for status quo as far as Islam and Muslims were concerned, and regarded new ideas such as the two nation theory, the concept of Muslim nationhood and the territorial specification of Islam through the establishment of Pakistan as innovations which they were not prepared to accept under any circumstance. It was in this background that Jinnah pointed out to the students of the Muslim University Union: "What the League has done is to set you free from the reactionary elements of Muslims and to create the opinion that those who play their selfish game are traitors. It has certainly freed you from that undesirable element of Molvis and Maulanas. I am not speaking of Molvis as a whole class. There are some of them who are as patriotic and sincere as any other, but there is a section of them which is undesirable. Having freed ourselves from the clutches of the British Government, the Congress, the reactionaries and so-called Molvis, may I appeal to the youth to emancipate our women. This is essential. I do not mean that we are to ape the evils of the West. What I mean is that they must share our life not only social but also political." [4]
Deobandis are Anti-Pakistan - Part - 3


The history of the Ulema in the sub-continent has been one of their perpetual conflict with intelligentsia. The Ulema opposed Sir Syed Ahmad Khan when he tried to rally the Muslims in 1857. Nearly a hundred of them, including Maulana Rashid Ahmad Gangohi, the leading light of Deoband, ruled that it was unlawful to join the Patriotic Association founded by him. However, the Muslim community proved wiser than the religious elite and decided to follow the political lead given by Sir Syed Ahmad.
The conflict between conservative Ulema and political Muslim leadership came to a head during the struggle for Pakistan when a number of Ulema openly opposed the Quaid-i-Azam and denounced the concept of Pakistan. It is an irony of history that Jinnah in his own days, like Sir Syed Ahmad before him, faced the opposition of the Ulema.
The Ahrar Ulema -- Ataullah Shah Bukhari, Habibur Rahman Ludhianawi and Mazhar Ali Azhar – seldom mentioned the Quaid-i-Azam by his correct name which was always distorted. Mazhar Ali Azhar used the insulting sobriquet Kafir-i-Azam (the great unbeliever) for Quaid-i-Azam. One of the resolutions passed by the Working Committee of the Majlis-i-Ahrar which met in Delhi on 3rd March 1940, disapproved of Pakistan plan, and in some subsequent speeches of the Ahrar leaders Pakistan was dubbed as "palidistan" . The authorship of the following couplet is attributed to Maulana Mazhar Ali Azhar, a leading personality of the Ahrar:
Ik Kafira Ke Waste Islam ko Chhora
Yeh Quaid-i-Azam hai Ke hai Kafir-i-Azam. [6]
(He abandoned Islam for the sake of a non-believer woman [7], he is a great leader or a great non-believer)
Deobandis are Anti-Pakistan - Part - 4


During the struggle for Pakistan, the Ahrar were flinging foul abuse on all the leading personalities of the Muslim League and accusing them of leading un-Islamic lives. Islam was with them a weapon which they could drop and pick up at pleasure to discomfit a political adversary. Religion was a private affair in their dealings with the Congress and nationalism their ideology. But when they were pitted against the Muslim League, their sole consideration was Islam. They said that the Muslim League was not only indifferent to Islam but an enemy of it.
Dr. Zakir Naik says "Making Pakistan was a Blunder".

The poorly defined shape of Pakistan and the debate that continues till today on what Jinnah wanted for Pakistan may perhaps be traced to this speech in 1943:
http://thepartitionofindia.blogspot.com/2012/05/jinnahs-in-camera-speech-to-muslim.html

"Meanwhile discourage anything that will create dissensions in the Muslim Camp. For instance, discussion or determination of fundamental rights for citizens of Pakistan, or production of a cut and dried scheme for Pakistan must create controversies and differences of opinion and should, therefore, be avoided for the present."