KARACHI: Wali Khan Babar, Geo News reporter has been shot dead in a terrorist attack in Liaquatabad, Geo News reported Thursday. According to Geo News, the reporter was on his way back home from Geo News office, when he was attacked by terrorists. According to initial report, he was intercepted by unidentified saboteurs, who on recognizing him, opened gunshots at him point blank, leaving him dead on the spot. His body was recovered from a car. Geo News said it was an incident of target killing, as Wali Khan received at least five bullets—two in forehead, one in jaw and two gunshots hit his neck.According to hospital sources, Wali Khan received at least five bullets. It should be mentioned here that Wali Khan Babar was covering operation against drug-traffickers in Pehalwan Goth. He filed his report at Geo News office and was on way back home, when he was gunned down. http://www.thenews.com.pk/NewsDetail.aspx?ID=9324
GEO TV Wali Khan Babar Case - GEO TV (Date 8 April 2011)

At least 42 journalists are killed in 2010 as two trends emerge. Suicide attacks and violent street protests cause an unusually high proportion of deaths. And online journalists are increasingly prominent among the victims. A CPJ special report

A December suicide attack in Pakistan's Mohmand tribal district claimed the lives of two journalists. (Reuters/Umar Qayyum)
Published December 15, 2010
NEW YORK
Amid a rash of suicide attacks, Pakistan became the world’s deadliest country for the press in 2010, with at least eight journalists killed there in connection with their work, constituting a significant portion of the worldwide death toll, the Committee to Protect Journalists said in its year-end analysis.
http://cpj.org/reports/2010/12/journalists-killed-pakistan-deadliest-nation-press.php


Extortion a pretext to set me aside: Dr Mirza 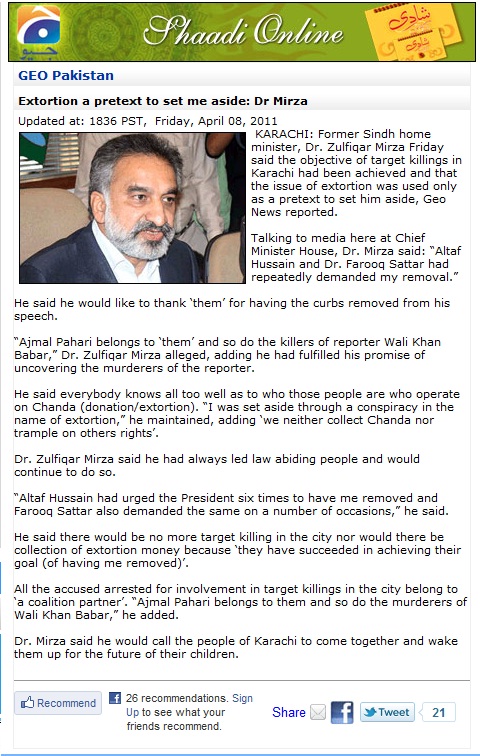