Originating centuries ago in the Jodhpur and Jaisalmer desert areas of Rajasthan, the Banjaras were bullock transport carriers and builders of great monuments, who ranged throughout the subcontinent negotiating and maintaining expensive contracts to supply goods to important customers as the Moghal armies and the British. For centuries, they efficiently moved their enormous caravans through vast roadless tracts of all India, guarantying safe conduct for grain, salt and messages. Doing so they spread from Kashmir to Tamil Nadu, from Orissa to Gujarat, spilling over into Sind, Pakistan, Iran and further west. Since they wore all their wealth, they were famed for their colorful dress and spectacular jewelry, and known for their lyricism, for song, poetry and dance, and for the maintenance of a unique aesthetic in their embroidery.

With the advent of the railway and the building of a road system, the Banjaras lost their primary occupation, but retained their tradition of monument buildings. Typical of peripatetic nomads, the Banjaras maintain strong boundaries so that they can interact with surrounding peoples and yet retain their cultural integrity. Such boundaries include the separate villages called tanda where the majority of the Banjaras still live today, situated near large cities where they work as construction laborers, or in remote rural areas where they farm, raise and herd animals. Their religion very different from the mainstream one. Their myths are origin, traditional taboos and social structure. The language they use is known as “ghormati” or “Banjaraboli”, related to Hindi, Rajasthani, Punjabi and Roma of the European gypsies, unintelligible to most outsiders, while learning, the regional languages of every part of India where they have settled. And their distinctive colorful clothing, jewelry and embroidery.
Banjara performed by Gulzar Manganhaar (Courtesy: Dr Fouzia Saeed)

An endogamous ethnic people, the Banjaras prohibit marriage with outsiders. Among themselves, they are exogamous, marrying only with members of opposite clans, known as gotras. This Hinduized form of exogamy takes its model specifically from the cast system from the Rajputs of Rajasthan. The same gotras are used throughout the subcontinent, allowing Banjaras from distant places to identify themselves to one another by reciting their lineage. Their religion is animistic and implies a deep respect for natural processes and a close alliance with ambiguities inherent to their life. The Banjaras have a high tolerance for irrationality, for teasing and mischievousness, for ambiguity. These dual aspects or contradictions contribute to the hostility and fear that mainstream people exhibit toward the Banjara…. Nationwide, they trace their origin through a complex lineage to cow-herding God Krishna and his consort Radha. At the same time, they retain allegiance to local and pan. Banjaras heroes, gods, goddesses, pilgrimage sites and rites interlaced with their particular history and pattern of wandering. Banjara deify ancestors and saints are worshipped and revered, their own priests, bhagats, interfacing with ancestors and interpreting omens, dreams, miraculous stories and magic. 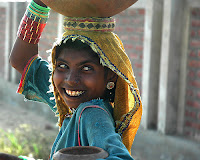 Some materially wealthy or some impoverished, the Banjaras appear to feel at ease anywhere, either moving through the country side of Karnataka, or selling their wares on market day in Goa or at home in their tanda throughout the subcontinent. Synonyms for groups and subgroups of the Banjaras, usually having regional and occupational significance, include the following: banjara, banjari, brinjari, gauria, gavadia, laban, labhana, labhani, lamani, lambani, lambadi, sugali, bamania, charan, ghor, marwadi, and many other names…….

Note: The Khartals are a two blocks of wood which are held in the hand of the musician. The pieces of wood are not connected in any way, but when held correctly they can be clapped together at high speeds to make fast complex beats. http://www.youtube.com/watch?v=yIYA6nfsfIQ
Courtesy: Travel video Rajasthan http://www.youtube.com/user/visionrajasthanjpr
Chapar (Khartal - wood clapper), Alghozo and Dillo (Matka)
Jugalband with Khartals and others.

Signaling their ethnic membership, all Banjaras embroideries are designed for a nomadic life style and, while featuring geometric, floral and animal motifs used by a majority of India’s village peoples, Banjara embroidery design is strikingly different.
For dancing and ordinary ceremonial wear, women use traditional skirts, shawls and backless blouses generally made of commercial textiles, synthetic yarns and locally available mirrors and metal ornaments. The blouses usually are ornamented on the sleeves and fully embroidered with mirrors across the front. Embroidered flaps with metal ornaments are added to the blouses of married women. The shawls have embroidered borders along the top and bottom edges with a wider more elaborate strip of mirror embroidery at the center top that frames the face. The skirts, hanging low on the hips, are worn with the kodi sadak, a long rope of cowries; the waist bands are generally reinforced with sturdy embroidery, worked on a red quilted or twined ground. Particularly fine pieces are made for prospective brides.
Banjara women throughout India wear elaborate twisted and braided hairdos that support and display jewelry and textiles; those styles are typical of Rajasthan. The traditional dress is completed with rows of ivory or bone bracelets, nowadays made of white plastic, worn on the arms, with silver bangles, nose gold ring (bhuria), beads or silver coins necklaces.
Amongst the Banjaras, the single most important ceremonial textile is an embroidery approximately 50 cm. square, of many uses including wedding water pot cover or ritual table cover. It can pre folded to make up different kind of elaborately embroidered dowry bags.
Reference sources:
“Banjara: Adornment of a people of all India.” by Nora Fisher. In “Mud, Mirror and Thread. Folk traditions in rural India” 1993 – 1994.
“Castes and Tribes of Southern India”. By E. Thurston. Government press, Madras 1909 – Volume IV (Lambadi – Pages 207 to 232)
“The Art and Literature of Banjaras – Lambanis” by D.B. Naik – Abhinav Publications 2000.
Courtesy: http://www.suryasgarden.org/History.html
Posted by Aamir Mughal at 2:29 AM