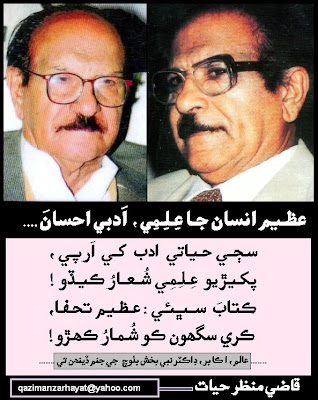 HYDERABAD: Renowned historian and research scholar of Pakistan Dr. Nabi Bux Baloch passed away here at 3.00a.m on Wednesday at his sister's home. He was 94 and survives by five sons and three daughters. Dr. Nabi Bux Khan Baloch was scholar of Sindhi, Persian, Arabic and Urdu languages. He was author of a number of books on Sindh history, and about 42 volumes on Sindhi Folklore. He also compiled and published Sindhi dictionary in five volumes. Moreover, he compiled Sindhi-to-Urdu, Urdu-to-Sindhi dictionaries co-authored with Dr. Ghulam Mustafa Khan. 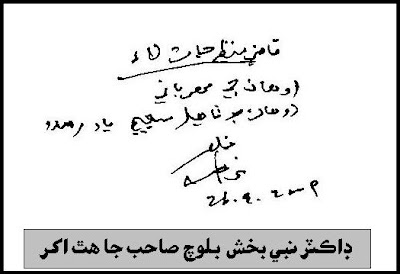 He has compiled works of Classical Sindhi poets including Shah Inayat, Qadi Qadan, Khalifo Nabibakhsh, Hamal Faqir and compiled works of Shah Abdul Latif Bhittai in ten volumes. Dr. Nabi Bux Khan Baloch was born on December 16, 1917, in Jaffer Khan Laghari village, Taluka Sinjhoro, Sanghar District. Late scholar started his education from Nowshera Feroz High School. He obtained his B.A. from Jhuna Garh College from Bombay University and got his M.A. Arabic First Class First and LL.B from Aligarh Muslim University. In 1946 he went to Columbia University where he did his Master's in Education and got his Doctoral Degree in the same field. His thesis was on Teacher Education in Pakistan. 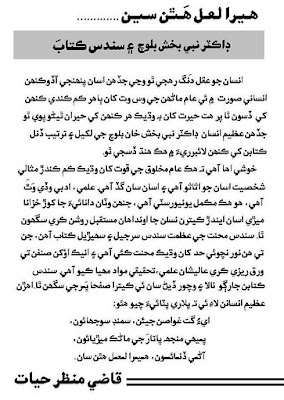 After completing the Education, he returned to Pakistan. For a short period he worked in Information and Broadcasting Division as Officer on Special Duty and was to join Damascus in the Ministry of Foreign Affairs when Allama I. I. Kazi, the founder of Sindh University, invited him to join the newly established University as Professor of Education to establish first Department of Education in Pakistan. Later, he rose to the positions of the first Dean of Education Department and Vice-Chancellor of University of Sindh. In 1976, he was called upon to join Ministry of Education in Islamabad where he established first Islamic University Islamabad, initiated the scheme of Great Books of Islamic Civilization under Pakistan National Hijra Council. 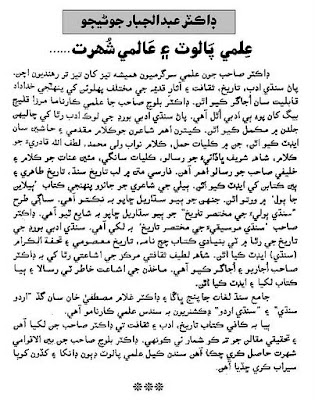 He also worked as first Chairman of Sindhi Language Authority and Chairman of Allama I.I. Kazi Chair. He was Professor Emeritus. His correspondence in Sindhi Language has been published by Sindh Moti Manik Tanzeem Hyderabad and Institute of Sindhology, University of Sindh. Latest work covering his correspondence with world scholars from 1946 to 2006 has been published under the title 'World of Work: A Scholar's Dilemma' an introduction covering biographical landmarks of his life, published by Institute of Sindhology, University of Sindh in March 2007. (PPI) REFERENCE: Renowned historian Dr. Nabi Bux Baloch passes away Updated at 10:40 PST Wednesday, April 06, 2011 http://www.thenews.com.pk/NewsDetail.aspx?ID=13704 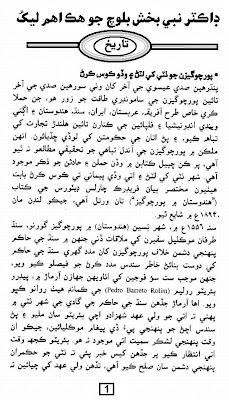 Some personalities are so versatile and the fields of their achievements so varied and vast that it becomes much difficult to capture their personality in article-length writings. Prof Dr Nabi Bukhsh Baloch is one such personality. He is a multi-faceted diamond whose lustre has not been eulogised in a befitting way. A couple of years ago Pakistan Academy of Letters published a book on him in its series ‘Pakistani adab ke meymaar’. Written by Muhammad Rashid Sheikh, the book titled Dr Nabi Bukhsh Baloch: shakhsiyet aur fun successfully captures at least some glimpses of the personality and literary achievements of the giant known as Dr Baloch. In writing this piece, I have benefited greatly from the book and also from the Urdu translation of an article written by Dr Abdul Jabbar Junejo. 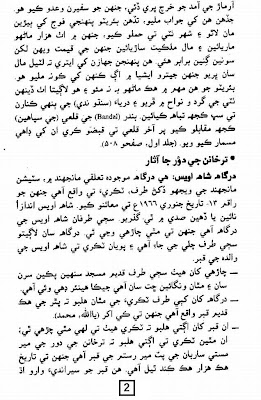 Prof Baloch has written in seven languages — Sindhi, Arabic, Urdu, English, Persian, Balochi and Seraiki. In addition to editing, compiling and translating over 50 books, he has worked on some basic aspects of the Sindhi language, history of Sindh and history of Islamic literature, setting a stage for other scholars to work on. Among such projects, a comprehensive Sindhi dictionary, history of Muslims of the Indo-Pak subcontinent in 25 volumes and 100 great books of the Islamic world deserve a special mention, his other works are not any less important though. 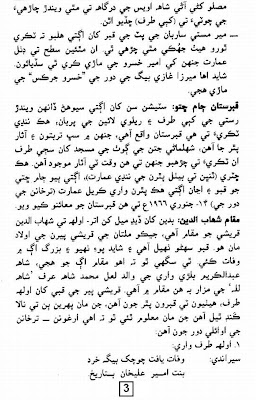 Despite a long history of Sindhi lexicography and a number of Sindhi dictionaries, the writers and scholars of Sindhi had always felt a need for a comprehensive Sindhi dictionary. Dr Baloch took up the project as a challenge and with rigorous field work and deep research compiled a Sindhi dictionary in five volumes, taking care of all technical aspects of lexicology. 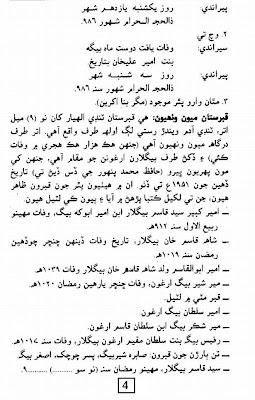 Although he had finished the job in 1954, the printing work, beginning in 1957, took too long and the last volume appeared in 1988. Dr Baloch wanted to revise and update it in the light of the classical and folk Sindhi works (that has been published in 43 volumes) but his advice was ignored. His other lexicographic works include a Sindhi-Urdu dictionary and an Urdu-Sindhi dictionary (both in collaboration with Dr Ghulam Mustafa Khan), a one-volume Sindhi dictionary and an edited version of an old Sindhi dictionary. 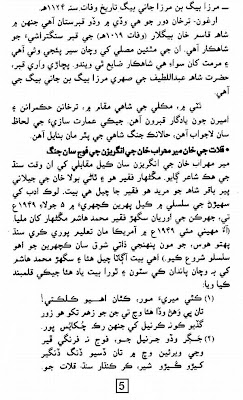 Aside from his other achievements as director of the National Commission for Research, History and Culture, Dr Baloch had chalked out a grand plan to compile the history of the Indo-Pak subcontinent in 25 volumes since he believed that western scholars and historians have not done justice in writing the history of the region and have largely ignored some very vital source materials such as books and letters written by Sufis and Muslim scholars. Dr Baloch got published as the first volume in the series ‘Chach Nama’, an important source on the history of Sindh in Persian, with an introduction in English. It is a pity that he was removed from the post in 1983 and after he left the entire project was shelved.
In 1983, he was made an adviser in the National Hijrah Council and, as is his disposition, he immediately chalked out a great plan. It was about procuring, editing, translating and publishing great books written in the Islamic world. He believed that Muslims had given the world a great treasure of books in different branches of knowledge and many of them had been wiped out from the face of the earth mainly due to negligence and indifference. The remaining wealth of this legacy should be preserved and spread. It was decided that initially 100 great books of the Islamic world would be edited and published. Baloch sahib visited some of the best museums, libraries and archives in different countries of the world to obtain the manuscripts, copies or rare editions of some of the best books on a variety of topics. He got translated into English and published six of them and the other 10 were in different stages when he was removed. It was fate yet again that hampered his plans otherwise he has never surrendered before difficult times as is evident from his life. 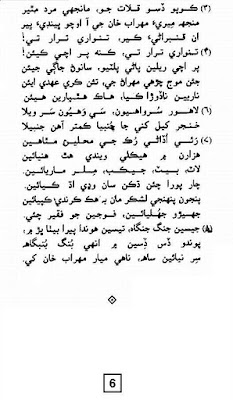 Born in March 1919 in a small village named Qarya Jafer Khan Laghari in the district of Sanghar, Sindh, Nabi Bakhsh Khan Baloch had to bear some great hardships since early childhood to acquire an education. Orphaned at the age of six months and living in a far-flung village that was deprived of all amenities, he fought the odds bravely and did his Masters in Arabic from Aligarh Muslim University in 1943. Here he Prof Dr Nabi Bukhsh Baloch met renowned scholars and professors. Among them was Allama Abdul Aziz Memon, the then head of the Arabic department, who inspired him most. Both struck a friendship that lasted till Allama Memon’s death in 1978. Allama Memon, according to Dr Baloch, used to take a stroll every evening and Baloch sahib, a keen student of his, would give him company. During the walk the able pupil would unleash a deluge of questions about the Arabic language, literature and other innumerable scholastic issues. The erudite teacher would only be glad to reply. With Allama sahib’s permission, Baloch sahib began scribbling down the conversation and the result was a scholarly piece published under the title ‘Mahazraat-e-Memoni’. Under the guidance of Allama Memon, Baloch sahib began research on ‘Sindh under Arabs’ to earn a doctorate. But in 1945 he had to leave it unfinished as Pir Illahi Bux, also an Aligarian, had asked Dr Ziauddin Ahmed, the then Vice-Chancellor of Aligarh University, to relieve Baloch sahib since his services were needed more as a lecturer at the newly established Sindh Muslim College at Karachi.

Winning a doctoral scholarship in 1946, Baloch sahib left for the US where he earned a doctorate from Columbia University on ‘A programme for teacher education for the new state of Pakistan’. In 1949, returning back with a PhD under his belt, Dr Baloch was denied a decent job by the Public Service Commission. He began research on Sindhi folklore and travelled across Sindh for some 13 months with very little paraphernalia. These cumbersome trips on foot and camelback proved very fruitful as he collected invaluable material for his research work on Sindhi folklore which was published later and is held in high esteem. Later, he joined the government’s information and broadcasting division and during his stay in Karachi in 1950-51, carried out extensive research on Sindh’s history proving that the location of Daibel was in fact where the ruins of Bhambhor were situated.
Dr Baloch was selected as the press attaché for the Pakistani embassy in Damascus in 1951. Meanwhile, Allama I. I. Kazi, the then vice-chancellor of Sindh University, offered him to join the university as professor of education. At Sindh University he proved to be an asset and later established a department of Sindhi language and the Institute of Sindhology. He also launched several research journals such as ‘The University of Sindh Journal of Education’ and ‘Sindh University Research Journal of Arts, Humanities and Social Sciences’. He was appointed vice-chancellor of Sindh University in 1973.
In 1976, Dr Baloch’s services were obtained by the federal ministry of education and in 1980 he was made the first vice-chancellor of the International Islamic University, Islamabad. The university was very fragile in its early phase and there were only nine students. Here he worked hard to make this nascent university stand out and just when it began to flourish he was removed. In 1990, the Sindhi Language Authority was established and Dr Baloch was a natural choice as its first chairman. In the brief span of his tenure as chairman, he got 25 books published.
But a workaholic as he has been all his life, Baloch sahib could not sit idle and at the ripe age of 75 began fresh scholarly projects. Since then he has published his work on ‘Shahjo risalo’ in 10 volumes, revised the comprehensive Sindhi dictionary in five volumes and authored ‘A treasury of gems’ (a collection of colloquial and rustic idioms of the Sindhi language) in three volumes. The work on the remaining volumes is in progress. Dr Baloch turned 90 this year and is busy as usual with his scholarly works. His simple life, humility and continuous hard work are lessons for those who complain of scarcity of time and have adverse circumstances as a pretext for not working hard. Here is a glittering and dazzling life to emulate. Tighten your belt! REFERENCE: Dr Nabi Bukhsh Baloch Dr Nabi Bukhsh Baloch: a nonagenarian scholar By Rauf Parekh Monday, 23 Nov, 2009 http://adabiyatepakistan.blogspot.com/2009/11/dr-nabi-bukhsh-baloch.html
Posted by Aamir Mughal at 12:57 AM