On the first day of the new session of the lower house, Chaudhry Nisar kicked off with a debate on President Asif Ali Zardari’s address to the joint sitting of parliament. He criticised the country’s intelligence agencies, mainly the Inter-Services Intelligence, for meddling in political affairs and other matters legally beyond their mandate. “We will not allow any new Kargil where someone is blamed for somebody else’s doings. This parliament must be informed about the role that intelligence agencies are playing in the making and breaking of political parties today. If they go beyond their role of safeguarding the geographical boundaries of the country and indulge in political affairs, we will be left with no option but to expose them,” Chaudhry Nisar said. REFERENCE: Blame game: With fiery speech, PML-N throws down the gauntlet By Irfan Ghauri / Zia Khan Published: April 12, 2011 http://tribune.com.pk/story/148100/blame-game-with-fiery-speech-pml-n-throws-down-the-gauntlet/ 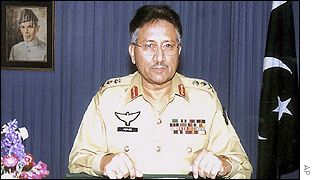 General Pervez Musharraf hopes the referendum will give his presidency legitimacy. A referendum win would allow him to remain in office until 2007 and he could well stay on even longer.After his coup in 1999, General Musharraf declared in a press conference that he would remain in office for just three years. But like many military rulers before him he is reluctant to give up power.He argues that his staying in office is the only way to ensure economic recovery, social stability and the eventual establishment of "true" democracy in Pakistan. But he is also motivated by a fear that, if he were to stand down in favour of democratically elected politicians, he could face a treason charge. The army has never been able to deny that the 1999 coup was unconstitutional.
Military precedent
A referendum win, however, might not give President Musharraf the legitimacy he is seeking. A former military ruler in Pakistan, General Zia, also called a referendum but the tactic brought him few benefits. In 1984, Zia put this question to the Pakistani people: "Do you endorse the process initiated by General Mohammed Zia ul Haq, the President of Pakistan, to bring in laws in conformity with the injunctions of Islam as laid down in the Holy Koran and Sunnah of the Holy Prophet (peace be upon him) and for the preservation of the ideology of Pakistan".
Even though Zia won, the question was so loaded, and the turnout so low, he still faced sustained challenges from the politicians right up until the moment he died in suspicious circumstances in a 1988 air crash. President Musharraf has indicated that this time the referendum will be in the form of a simple "yes" or "no" question.But the military fears a low turn out. All the main political parties and religious groups have called for a boycott of the vote.
Politicians fight back
The politicians now believe the army will deny them power for the foreseeable future. When the referendum result is announced next month, the turn out figures will almost certainly be disputed. Ever since the 1999 coup, the major political parties have played a muted role, for the most part accommodating themselves to the military government. Now, President Musharraf is clearly determined to remain in power they are likely to oppose him with greater vigour. Under Pakistan's constitution, the president should be elected by the membership of the National Assembly and the Senate. The politicians had hoped that, after the parliamentary elections due this October, they could use that power to deny President Musharraf another term. But by opting for a referendum, President Musharraf is calculating that he will be able to by-pass the constitutional procedure and remain in office even if the politicians oppose him. REFERENCE: Analysis: Musharraf's referendum gamble Friday, 5 April, 2002, 20:34 GMT 21:34 UK http://news.bbc.co.uk/2/hi/south_asia/1913990.stm 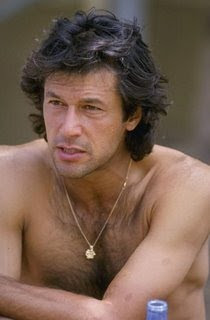 LAHORE, April 5: While the Musharraf League is not denying Musharraf-Imran contacts, it says efforts are under way to form a `major alliance` of different political parties other than PPP and PML-N to give an alternate leadership. “We have started making efforts to form an alliance of Mutahidda Quami Movement (MQM), Pakistan Tehrik-i-Insaf (PTI), All Pakistan Muslim League (APML) and breakaway factions of Pakistan Muslim League-Quaid (PML-Q) in next general elections so that people have option other than PPP and PML-N,” Fawad Chaudhry, spokesman for Musharraf`s APML, told Dawn. He said the people wanted an alternate leadership that could steer the country out of crises and address their problems. REFERENCE: APML making efforts for `major alliance` By Zulqernain Tahir | From the Newspaper April 6, 2011 (1 week ago) http://www.dawn.com/2011/04/06/apml-making-efforts-for-major-alliance.html

Pakistani cricket legend-turned politician Imran Khan on Tuesday backed the referendum to be held next month to decide the future of President Pervez Musharraf but his fledgling Pakistan Tehrik-e-Insaf headed for trouble as some of its leaders have opposed it openly. After considerable dithering, Imran Khan declared that his party has decided to support Musharraf's referendum. In a statement issued from Karachi, Imran said he has decided to support the referendum as he believed that Musharraf wanted "to make Pakistan a modern Islamic, welfare state". Imran said his party wants to play its real role as "we desire that democracy is promoted in the country and a clean leadership come to the fore". Imran launched his party with a lot of fanfare in the last general elections but ended up in a great disappointment after he failed to win a single seat even though he himself contested 22 seats from different regions.
A bitter critic of former Prime Ministers Benazir Bhutto and Nawaz Sharif, Imran alleged that politicians in the country minted money through corruption during the last 12 years. The referendum has been opposed by all the major political parties including Bhutto's Pakistan Peoples Party, (PPP) and Sharif's Pakistan Muslim league (PML). While Imran announced the support to the referendum, a section of his party headed by General Secretary Miraj Muhammad Khan openly opposed the party decision to back it. Pakistan Daily quoted a party sources as saying that Miraj was bitterly critical of the party accepting the "undemocratic" move of Musharraf trying to get elected for a five year term through a referendum. REFERENCE: Imran backs Musharraf's referendum, party members oppose Press Trust of India Posted: Apr 09, 2002 at 1518 hrs IST http://www.expressindia.com/news/fullstory.php?newsid=9092
Imran Khan's Meeting with General Pervez Musharraf - 3 (Apas Ki Baat 12 April 2011)

Imran says he got positive response from Taliban Friday, December 11, 2009 By Ansar Abbasi - ISLAMABAD: Pakistan Tehrik-e-Insaaf chief Imran Khan, who on Wednesday offered his services and even showed the willingness to go to the tribal areas to get the mounting terrorism issue resolved through political dialogue, got encouraging response from the Taliban side. His appeal, however, seems to have fallen on the governmentís deaf ears.The cricket hero-turned-social worker, Imran Khan, told The News on Thursday that after his Wednesday’s press conference, he was contacted by some important Taliban groups, who posed their full confidence in him for political solution of the problem. Khan said that no one from the government side contacted him though. Imran Khan on Wednesday volunteered to mediate between the government and the Taliban leadership to bring peace, claiming that the menace of terrorism was bound to grow because of the military operation in South Waziristan and in the absence of a political solution. In his press conference, he had said that if the government gave him the mandate, he was willing to travel to the tribal areas and elsewhere to negotiate peace. His only pre-condition to mediation between the two sides was that the government would not let the US-pressure to ruin his peace efforts like the past. While some people believe the government has no political strategy to address the issue and is entirely dependent on the military operation that has allegedly aggravated the problem, Imran has taken a bold step amidst great chances that he would be dubbed pro-Taliban by confused Pakistanis and arrogant foreigners. Imran Khan got an encouraging reaction from some Taliban leaders. Khan said that he was now even considering convening an all parties conference (APC) on the issue. REFERENCES: Imran says he got positive response from Taliban By Ansar Abbasi Friday, December 11, 2009 http://www.thenews.com.pk/daily_detail.asp?id=212671 -
To a question about rumours of Imran Khan`s meeting with former army chief president Pervez Musharraf in London, Chaudhry said: “The party does not deny nor confirm about the meeting, however, it wants Mr Khan to join hands with us for the larger interest of the country. Imran was critical of Musharraf when the latter was a military chief now he is a politician.” Chaudhry said several breakaway leaders of PML-Q were in contact with Gen Musharraf and had assured him of their support. “Shiekh Rashid had two meetings with Musharraf and S. M. Zafar and Makhdoom Ahmed Mahmood are in London to see him,” he said. The PTI, however, categorically denies saying no such meeting has taken place. “These are rumours. However, the PTI is open for a dialogue with any political party despite ideological differences,” PTI spokesman Omar Sarfraz Cheema said. He said Imran Khan was a credible leader the masses were looking up for salvage. To a question, Cheema said the PML-N was worried over the growing popularity of PTI. “The PTI will emerge a strong political force in the next elections,” he said. REFERENCE: APML making efforts for `major alliance` By Zulqernain Tahir | From the Newspaper April 6, 2011 (1 week ago) http://www.dawn.com/2011/04/06/apml-making-efforts-for-major-alliance.html

URDU TEXT IS AS UNDER:

I hope Imran Khan, Jang Group of Newspapers, and Ansar Abbasi would also accept Taliban way of dealing with sportsmen: 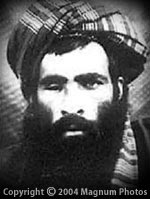 KARACHI, JULY 18: The Pakistan Football Federation said on Tuesday that it would not condemn an incident in neighbouring Afghanistan last week in which members of the Taliban militia shaved off heads of Pakistani soccer players for wearing “un-Islamic dress” during a friendly football match with Afghans at Kandahar. The bizarre incident occurred when the Taliban raided the third match between the players from Pakistan and their Afghan competitors in the religious capital of Afghanistan, Kandahar, and accused the Pakistani players of “spreading obscenity and inciting passions” by wearing shorts. Reference: PFF refuse to condemn tonsures Wednesday, July 19, 2000 Indian Express http://www.indianexpress.com/ie/daily/20000719/isp19036.html

Though some political leaders are reported to have meetings with Musharraf, no body is ready to admit it. Sheikh Rashid, president of Awami Muslim League, only confirmed that he had a “hand shake” with Musharraf in a wedding in Dubai a few months ago. “That was all about my meetings with the former army chief,” outspoken Rashid said. A senior leader of the PML-Q who wished not to be named said: “Only a politically naÃ¯ve leaders can think joining hands with Musharraf seeing his popularity in Pakistan,” he said. “We have hardly managed to dissociate our party from the bad name Musharraf earned by attacking Lal Masjid. Those left us are also aware of this,” he added. The PML-Q leader further said: “There is some sense if we talk about PML-Q-PTI-JI (Jamaat-i-Islami) alliance in future elections. The leadership of these three parties often meet and discuss the possibility keeping in view their less ideological differences,” he said, adding the MQM only believed in “post-election” alliance. MQM`s deputy convener Dr Farooq Sattar has advised Musharraf to first organize his party before thinking of any alliance. “There is no bar on dreaming. The MQM wants to go along with like-minded parties,” he said. REFERENCE: APML making efforts for `major alliance` By Zulqernain Tahir | From the Newspaper April 6, 2011 (1 week ago) http://www.dawn.com/2011/04/06/apml-making-efforts-for-major-alliance.html
Posted by Aamir Mughal at 6:47 AM