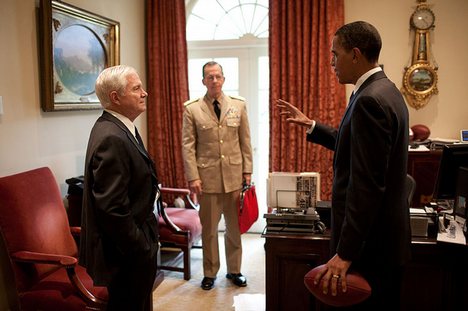 ISLAMABAD: The US Joint Chiefs of Staff Chairman, Admiral Michael Mullen, was in a mood to name and shame on Wednesday. Without mincing his words, he made it clear that ISI’s continued links with the Haqqani network were at the core of Pakistan’s problematic relations with the United States. He said ISI’s relationship with the network was unacceptable to the American leadership.“The ISI has a rich history of how they operated in this part of the world, to protect their own country; I understand that some of the aspects of that we strongly disagree with and that is something that we continue to address.”

Philip Agee: Inside the CIA Part 1 - Jamaica, the Intelligence Community, and Neo-Fascism (1995)

The Haqqani network had fuelled the Afghan insurgency by supporting, training and funding fighters who were killing American and coalition troops in Afghanistan, said the admiral, who views himself as a soldier-statesman. Though the Haqqani network’s presence in the tribal areas and the army’s reluctance to go after them has been a sore point in Islamabad-Washington relations for some time now, Admiral Mullen’s words indicate a hardening of the American stance. Rarely in the past have American officials been this open and categorical about links between the ISI and the network.


It is also noteworthy that Michael Mullen did not just press for military action against the militants in North Waziristan, but also said that ISI’s links with the Haqqanis were unacceptable. It is pertinent to mention here that the Pakistan Army and the ISI have repeatedly denied these allegations and have asked for evidence in support of such charges. “It is fairly well known that ISI had a relationship with the Haqqani network and addressing the Haqqani network from my perspective is critical to the solution set in Afghanistan. … that’s at the core — it’s not the only thing — but that’s at the core that I think is the most difficult part of the relationship,” Admiral Mullen, who is quite often criticised for being soft on the Pakistan military, said in an interview with Dawn.
BCCI Bank Financed Covert CIA Terrorist And Drug Smuggling Operations In Afghanistan In The 80s


Though President Obama’s top military officer was in Pakistan for discussions with the military leadership on tensions between the two countries that are said to have virtually put the entire relationship on hold, it was unclear what prompted him to reproach the ISI this openly. His talks with Pakistani army commanders, which were to be held on Wednesday night, are to be followed by crucial talks between Foreign Secretary Salman Bashir and American officials in Washington on Thursday. However, the American admiral’s blunt talk about the ISI and the Haqqanis made it clear that the rounds of talks in Pakistan and in Washington would hardly be a smooth affair.
Seymour Hersh on the CIA Assassination Team in Beirut, Lebanon (1987)

The CIA and the National Endowment for Democracy


He also made it clear that the Americans were not willing to yield on other issues either, which media reports have indicated that the Pakistan military is concerned about. He indicated that there would be probably no reduction in CIA’s footprint in Pakistan or in the drone attacks, which are mostly aimed at North Waziristan, the base of the Haqqanis, until the ISI dissociated itself from the Haqqanis. Admiral Mullen said: “I have a sacred obligation to do all I can to make sure that” the network is no longer able to support insurgents in Afghanistan. The Americans consider the Haqqani network and its role in the insurgency in Afghanistan as the most difficult challenge in the fight against the militants there. That they are ratcheting up the pressure on Pakistan is not surprising. Ties between the Haqqanis and the ISI date back to the Afghan jihad; the former is seen as the latter’s safest bet for retaining influence in Afghanistan after a US withdrawal.
Seymour Hersh leaks Cheney assassination squads

CIA Influencing of Elections in the Third World


This perception was strengthened after reports last year that Pakistan tried to orchestrate a dialogue between Kabul and the Haqqanis. The top US military official’s interview indicated that in his meetings with Joint Chiefs of Staff Committee Chairman Gen Khalid Shameem Wynne and Chief of Army Staff Gen Ashfaq Parvez Kayani, he would discuss US concerns about the Haqqani network as well as the growing outreach of terror networks allegedly operating from Pakistan, including the Lashkar-e-Taiba, Jamaatud Dawah and Tehrik-i-Taliban. He depicted a destabilising scenario in which terror groups such as LeT, JuD, Al Qaeda and the Haqqani network would become increasingly interlinked. “What I worry about all these organisations, whether it is Haqqani network, Al Qaeda, JuD, LeT… there is a syndication which has occurred in the region here over the course of last three years, which is more and more worrisome and increasingly so TTP, under [Hakimullah] Mehsud, has espoused aspirations outside the region,” he maintained.
More On Bush & Cheney Assassination Ring

Philip Agee on the Role of the CIA

The situation, Mullen said, led to the conclusion “that this area… the border area between Pakistan and Afghanistan is the epicenter of terrorism in the world”. But more damning were his comments that “it [the terrorism in the region] breeds and breeds more and more in terms of capability over time”. On more than one occasion during the interview, he suggested a close collaboration between India, Afghanistan and Pakistan to deal with the terror threat emanating from the tribal areas. Admiral Mullen, who was at times sceptical about Pakistani counter-terrorism efforts and on other occasions grandfatherly, did of course try to offer soothing diplomatic words too — in appreciation of the army’s fight against terrorism. “Example of the challenge that has re-emerged in a place like Mohmand is an important one to address and does indicate that this (problem of terrorism) does not go away easily and I admire the fact that the engagement there continues on part of Pakmil,” he said. The latest phase of the Mohmand operation took place in March and the semi-annual White House Af-Pak report cited it as an example of Pakistan’s inability to hold and build areas cleared of militants. He stressed that despite the challenges in bilateral ties, the military-to-military relations between the US and Pakistan had remained strong. He also very keenly spoke about the resilience of Pakistan-US bilateral ties, saying they withstood a very difficult phase over the past few months. REFERENCE: Mullen launches diatribe against ISI By Baqir Sajjad Syed | From the Newspaper April 21, 2011 (2 days ago) http://www.dawn.com/2011/04/21/pakistan%E2%80%99s-isi-links-with-haqqani-militants-us.html
Posted by Aamir Mughal at 1:15 PM