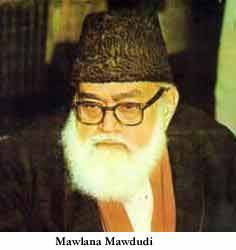 Read A book mentioned below to know as to what kind of Filthy Language Mawlana Mawdudi and his brother Khomeini used against Prophets [PBUT] and against the Companions [May Allah be pleased with everyone of them] of Prophet Mohammad [PBUH]. The book has provided the original quotes from Mawdudi’s book with the editions and page number. Mudodi Khumeni do bhai, Moudoodi and Khumeni(shia) two Brothers
http://www.scribd.com/doc/15702018/Mudodi-Khumeni-do-bhai-Moudoodi-and-Khumenishia-two-Brothers-a-deep-researc-book-by-Deoband-Ahlesunnat-wal-jamat 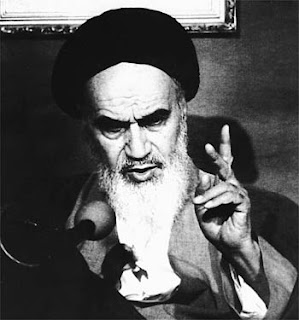 Be Careful who you call a Kafir, we don't have that authority..

Note that Maudoodi uses the term Ahmadi to mean the Lahore Ahmadis, and the terms Qadiani and Qadianism to refer to the group then headed by Mirza Bashir-ud-Din Mahmud Ahmad from Qadian.

My respected and honoured,

I have been here for only one week. After my arrival here, the correspondence that Sayyid Muhammad Shah has shown me included three letters from you, and I confess that it was your letters that made the greatest impression upon me. The earlier replies from the Shah sahib to you still stand valid, but I myself wish to write a brief reply to the three letters.

Regarding the views you have expressed about takfir, I have myself written much more about it earlier. As you have not seen the Tarjuman-ul-Quran before this, you are not fully aware of my views. If you had been reading this paper from the outset, then probably not only about takfir, but also regarding the other issues that you have mentioned, you would not have needed to ask anything and you would also have known what my policy is.

From among the followers of Mirza Ghulam Ahmad sahib, I also do not consider Qadianis and Ahmadis to be in the same category. In my opinion the Qadiani group is excluded from Islam, but the Ahmadi group is included within Islam. However, I consider it inadvisable to co-operate with this group or to encourage them because after becoming Ahmadi a man becomes very close to Qadianism. There can only be two reasonable attitudes in the matter of Mirza sahib. If a man believes him to be true then he should accept him as a prophet because a true person's claim to prophethood cannot be false. And if a man does not accept his claim to prophethood then it becomes obligatory for him, far from accepting him to be a mujaddid, not even to consider him as a gentleman because the person who is guilty of such a serious fabrication cannot be accorded any position of respect. The middle position taken by Ahmadis is untenable. When a man accepts someone as mujaddid and the Promised Mahdi, he would necessarily confirm his truth and honour him. Then when he finds in his unambiguous writings a claim to prophethood and to receiving revelation, he will not be able to take any position short of Qadianism. As to the educated people from among the Ahmadis who are adhering to this unreasonable position, we cannot issue any fatwa (ruling) against them on the basis of the Shari‘ah because they are denying the prophethood of Mirza. But we are bound to conclude either that they are adhering to their past errors and are guilty of obstinacy, or that they are denying the prophethood of Mirza with some reservation of mind, or lastly there is some flaw in their minds making them unable to realize the contradiction in their position. In any case, although we appreciate the work they are doing in support of Islam, we consider it the expedient policy not to encourage them because it is a path to assisting Qadianism.

As to the wrong beliefs prevailing among the various sects and parties of the Muslims, I have my own opinion about almost each one of them. However, I have never expressed those opinions nor taken part in fighting against them because I consider it to be merely a waste of time. The defect in the branches is due to a defect in the root. To allow the root to remain in the same condition while devoting effort to reforming the branches is foolishness. If we are to do something for the Muslims then we must devote all efforts to removing the weaknesses in the foundations. Then, Allah willing, the branches will by themselves become good.

Maudoodi in his statement said that: “… the [Lahore] Ahmadi group is included within Islam … we cannot issue any fatwa against them on the basis of the Shari‘ah …”. It means that according to Maudoodi, writing in 1938, the Lahore Ahmadis cannot be expelled from the Muslim community by means of any law based on Islam, and they are in fact included within Muslims. Whatever he thinks of the rightness or wrongness of our beliefs, whether he considers Lahore Ahmadis to be bad, obstinate and unreasonable, whatever dangers he perceives from our beliefs, all that is an entirely separate issue. What we are pointing out is that according to the view Maudoodi has expressed here, in terms of Islamic Shari‘ah the Lahore Ahmadis are Muslims and cannot be declared as non-Muslim.