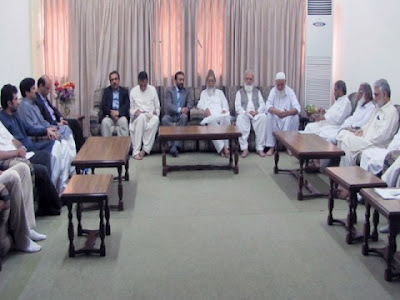 July 2012: Leaders of two arch rival political parties, Jamaat-e-Islami and MQM, held their first formal dialogue at the former’s headquarters in Mansura, Lahore and agreed to maintain political contacts in future and work jointly for the security and integrity of the country. MQM delegation led by Federal Minister Dr Farooq Sattar met the Jamaat Islami Amir Syed Munawar Hasan and Secretary General Liaquat Baloch here on Tuesday during which the JI invited MQM to join the “Go America Go” movement and also to join the grand alliance for timely and transparent elections in the country. Others present during the highly significant political meeting were Farid Paracha and Salman Butt from the JI side and Provincial Minister Faisal Sabzwari, Waseh Jalil and some other MQM leaders. The two sides discussed the prevailing political situation, in the context of situation in Karachi and Balochistan, challenges to the national security and the forthcoming general elections. Later talking to media, Dr Farooq Sattar said that they discussed all the important issues with JI leaders and said the MQM has decided to contact all parties to resolve issues facing the country and build a national consensus to ensure national security. He said all the political parties should work for strengthening of democracy, political stability and holding of elections on schedule or before in a transparent manner. He said they also discussed with the JI leaders killings and lawlessness in Karachi. He said there is need for an agenda by all political parties which could give hope to the poor, improve economic situation and promote peace. Dr Farooq Sattar demanded the holding of round table conference to find out solution of problems to national security on priority basis and all parties should debate on present issues. Munawar Hassan said they welcome the MQM leaders at JI headquarters and hoped that contacts would continue between the two parties in the future. He pleaded for a grand alliance to ensure timely elections fearing that now there are speculations whether the elections would be held on time or not. REFERENCE: Munawar invites MQM to join grand alliance to ensure transparent elections By: INP | July 24, 2012, 7:42 pm http://www.nation.com.pk/pakistan-news-newspaper-daily-english-online/lahore/24-Jul-2012/munawar-invites-mqm-to-join-grand-alliance-to-ensure-transparent-elections MQM delegation meets JI leaders By PPI July 24, 2012 - Updated 1333 PKT From Web Edition http://www.thenews.com.pk/article-60262-MQM-delegation-meets-JI-leaders
Posted by Aamir Mughal at 1:47 AM No comments: