Prime Minister Syed Yousuf Raza Gilani conferred the Nazria-i-Pakistan (posthumous) award on the late Lt-Gen Mujibur Rahman, one of Zia-era tormentors of the PPP. Gen Mujib was information secretary in the Zia regime and was accused of using his expertise in psychological warfare against the PPP after Zia had toppled the democratically elected government of Zulfikar Ali Bhutto. He was also accused of being instrumental in victimising, including torturing and flogging anti-regime journalists. Mr Gilani listened to the adulatory citation about Gen Mujib whose award was received by his daughter. The citation said Gen Mujib stood first in the psychological warfare training in the United States and was responsible for making the ‘Sada-i-Kashmir radio’ an effective tool against India during the 1965 war. PM Gilani honours PPP tormentor Dawn Reporter Saturday, 27 Mar, 2010 http://archives.dawn.com/archives/40272 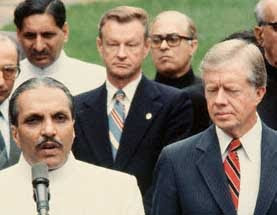 Federal information secretary Lt. Gen. Mujibur Rehman (the first army officer to be appointed to this post in the history of Pakistan) under General Zia In his book "Press in Chains", senior journalist Zamir Niazi said «.,that between 1948 and 1985, a total of 183 newspapers and periodicalswere the victims of punitive action taken in the form of totalclosure, demand for security deposit, issuance of show cause notices, curtailment or total withdrawal of government advertisementand newsprint quota or officially sponsored mob attack on their offices. Zamir Niazi in his book Press in Chains (1986) wrote: “May 13th was the blackest day in the history of journalism in the subcontinent, when four newsmen were ordered to be flogged by summary military courts. Those ordered to be whipped were, Masudullah Khan (Pakistan Times, Rawalpindi), Iqbal Ahmed Jafri (Sun), Khawar Naeem Hashmi (Musawat, Lahore), and Nisar Zaidi (Nawa-I-Waqt). Their offence included: ‘organizing meetings at open public places, raising slogans, displaying banners and starting hunger strike.’” REFERENCE: Communication Development & Human Rights By Sa'adat Rizvi http://dr.ntu.edu.sg/bitstream/handle/10220/466/AMIC_1988_05_10.pdf?sequence=1

Perhaps the worst the press suffered was during the Martial Law administration of General Zia-ul-Haq legitimised under a Supreme Court judgment in the name of the so-called ” Law of Necessity.” But while this period may be remembered for its oppressive measures including long spell of censorship banning of independent and dissenting newspapers, arrest of editors and journalists , sentencing them to rigorous imprisonment under Martial Law regulationsand even whipping them, it was also marked by memorable resistance put by the journalists and press workers led by the PFUJ and APNEC. This great struggle unprecedented in the annals of the Fourth Estate the world over began towards the end of November 1977 in Karachi only about five months following the advent of Gen. Zia’s Martial Law. The PFUJ’s struggle was triggered by the government’s ban on publication of Daily ” Musawaat”, Karachi. After the failure of efforts to convince the Martial Law authorities to lift the ban , the PFUJ and APNEC launched a campaign of hunger strike in Karachi from first of December 1977 o And within eight days of the struggle in which journalists and press workers from all over the country participated the government surrender and lifted the ban. 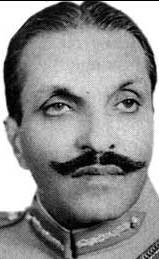 Egged on by its oppressive nature, the government again took recourse coercive methods against the dissenting press and banned the daily ” Musawat”, Lahore , and weeklies like ” Al-Fatah” and ” Meyar” and others, critical of the Martial Law regime. After the failure of protracted negotiations with the Government the national executives of PFUJ and APNEC decided to launch countrywide hunger strike movement from Lahore commencing from 30th April, 1978. The charter of demands included restoration of banned newspapers, release of “Musawat” editors, Messers Badaruddin and Zahir Kashmiri, and the paper’ s printer, Mir Jamilur Rahman, and reinstatement of dismissed journalists including office-bearers of PFUJ and APNEC employed in the government controlled NPT newspapers.

The historic movement was spread over two stages: one beginning in Lahore from April 30 and ending on May 30 and, the second beginning in Karachi from July 18 and ending on October 10, 1978. The two had their own distinct and memorable features marked by common inspiring spirit and enthusiasm. In the first phase’ in Lahore, the journalist and press workers who joined the hunger strike were arrested and sentenced under Martial Law Regulations from six months to one year rigorous imprisonment including three who were ordered to be flogged (Nasir Zaidi, Khawar Naeem Hashimi and Iqbal Jaferi were in fact flogged. The fourth, Masoodullah Khan was spared on the intervention of the doctor in view of Mr. Masood’s disability. It was during this stage that after having failed to suppress the movement for press freedom the military regime picked up the four renegades from the PFUJ and APNEC to create parallel PFUJ and APNEC pocket organisations known as ” Rashid Siddiqui Group”.These renegades who were given full publicity on official media supported the government and condemned the PFUJ’s struggle for press freedom exposing their true colours. As a result of the movement the government was forced to lift the ban on ” Musawat ” Lahore and release the arrested Journalists and Press workers by May 3oth but refused to reinstate the dismissed newsman from NPT papers. In addition, the government again banned ” Musawat ” Karachi. The PFUJ then at its meeting on June 12 at Karachi decided to resume the struggle from July 18, 1978.

The resumed struggle which started in Karachi with the arrest of PFUJ and APNEC President continued until 10th of October (almost two months and 25 days) had its own memorable features. For besides the journalists and press workers who came from all over the country to court arrest, scores of trade union workers, students and militant haris from interior of Sindh joined the movement and filled almost all the jails of Sindh. (During the Lahore struggle the arrested journalists and press workers were disbursed to almost all the jails of the province of Punjab). The Sindh phase of movement would also be remembered for the mass hunger strike unto death inside the jails. The hunger strike culminated in the acceptance of most of the APNEC-PFUJ demands by the Government. As a result “Musawaat” Karachi resumed its publication, arrested persons were released, and most of the 30 dismissed journalists of the NPT papers (Pakistan Times and Imroze) were reinstated (only four including the President of the PFUJ and APNEC were not taken back).

It was also during Gen: Zia-ul-Haq’s regime that ten senior journalists and office-bearers of the PFUJ belonging to the NPT papers – the Pakistan Times, Imroze and Mashriq – were similarly dismissed from service because they signed an appeal for ” Peace in Sindh ” when the government repressed and persecuted the people indiscriminately during the 1983 MRD Movement. The signatories to the appeal also included some 50 writers and poets on whom the doors of Radio and Television were closed as punishment. The journalists who were punished included Masood Ashar , Shafqat Tanvir Mirza , Azhar Javed , Mrs. Rakhshinda Hasan , Badarul Islam Butt, Aziz Mazhar , Aurangzeb, Mumtaz Ahmad , I.H. Rashid and Riaz Malik(late).This clearly proved that the Zia Government was callous and insensitive to the basic human rights of the people notwithstanding with its claim for Islamic justice . It was during this period that a most abominable version of the press censorship was imposed on newspapers wherein even Quranic verses and Prophet’s hadiths used to be censored if they reflected in any way on the person of Gen. Zia-ul-Haq regime or his policies. REFERENCE: MOVEMENT CALLED PFUJ BY MINHAJ BARNA http://pfuj.pk/history-of-pfuj/
Posted by Aamir Mughal at 3:20 AM