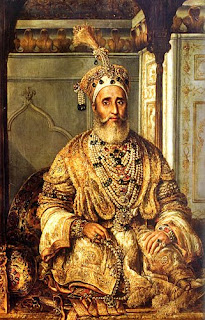 A Traditional 'Elitist' and 'Prejudiced' Picture of an Indian Mughal

Let me start with Mughals.

Late. Agha Shorish Kashmiri had written a book [I am forgetting the name of book it was either Us Bazar Mein] about Brothels [Kothas] in the Sub-Continent and he had written that Mughals promoted this Chakla [Brothels Culture in India] wherever they established their Forts and Palaces. 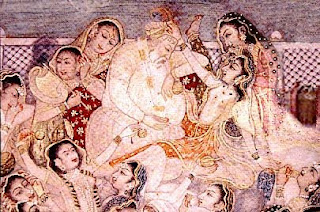 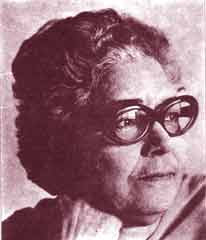 Last chapters of Yaadon Ki Baraat carry numerous love affairs of Shabbir Hassan Khan aka Josh Maleehabadi where in he gave a very grpahic description of love with at least two boys and several married and unmarried ladies. Josh Sahab Romanticised Brothel/Kotha Life of UP and Delhi in his memoirs saying that

These institutions are the citadel of culture and etiquette. We send our younger male to learn etiquette.

Now tell me is it allow in Indian or Pakistani Culture? Would Josh Sahab or any other honourable person would have sent his younger son to learn etiquette in Brothel. If that is so then why this honour was just restricted to Male Member of Nawab Class of UP, they should have sent their Mother, Daughters and Sisters there to teach all and sundry the etiquette. Do read a book on this Filth [Kotha Culture and Brothel Culture] Us Koochay Mein by Agha Shorish Kashmiri.

Lihaf [Quilt] by Late. Ms. Ismat Chughtai is written on Lesbianism amongst Nawabzadis [Elite in Lucknow, UP India] and Homosexuality amongst male Nawabs of Lucknow. Now tell me is it allow in Indian and Pakistani culture to even discuss these issues.

Mughal Dynasty instead of giving Universities and Education gave the gifts of Shrines [EVEN WORST THEN PROSTITUTE'S DEN no matter Ajmer or Nizamuddin Awliya ot millions of others both in Pakistan or India - please justify their existence in the light of Islam even the most redundant and Anti-Islamic Fatawa-e-Alamgiri cannot justify these Mazars], Forts, and Palaces to Indian Sub-Continent they also gave gifts of Brothels [Chakla/Kotha] to Indian sub-continent.

Do read an indepth book Tareekh-e-Owadh [Lucknow] by Hakeem Muhammad Najamul Ghani Kaanpuri and it will open your eyes as to what had been going around in the so-called Palaces of Nawabs in UP in 17 and 18 Century. Then tell me was that allowed in Indian and Pakistani culture as far as Islamic Point of View is concerned.

Regarding Ashraf of Pure Islamic Race [in their myopic and tunnel vision bloodline of Turks, Mughals and Arabs was the criteria]

O mankind! Lo! We have created you male and female, and have made you nations and tribes that ye may know one another. Lo! the noblest of you, in the sight of Allah, is the best in conduct. Lo! Allah is Knower, Aware. [AL-HUJRAAT (THE PRIVATE APARTMENTS, THE INNER APARTMENTS) Chapter 49 Verse 13]

No Mullah and his Fatwa is Proof [Hujjat] for Muslims when Zainab Bin Juhash {May Allah be pleased with her} who was paternal cousin of Mohammad {PBUH} and her first marriage was with a freed servant of Mohammad {PBUH}, Zaid Bin Haris {May Allah be pleased with him}. [{Ref: JILA UL IFHAM FIS SALAT WASSALAM ALA KHAIRUL ANAM BY IMAM SHAMSUDDIN ABU ABDULLAH IBN QAYYAM AL-JOZIYA translated by Qazi Muhammad Suleman Salman Mansoorpuri, Fomrer Session Judge Patyala India}

And it becometh not a believing man or a believing woman, when Allah and His messenger have decided an affair (for them), that they should (after that) claim any say in their affair; and whoso is rebellious to Allah and His messenger, he verily goeth astray in error manifest. And when thou saidst unto him on whom Allah hath conferred favour and thou hast conferred favour: Keep thy wife to thyself, and fear Allah. And thou didst hide in thy mind that which Allah was to bring to light, and thou didst fear mankind whereas Allah hath a better right that thou shouldst fear Him. So when Zeyd had performed that necessary formality (of divorce) from her, We gave her unto thee in marriage, so that (henceforth) there may be no sin for believers in respect of wives of their adopted sons, when the latter have performed the necessary formality (of release) from them. The commandment of Allah must be fulfilled. There is no reproach for the Prophet in that which Allahmaketh his due. That was Allah's way with those who passed away of old - and the commandment of Allah is certain destiny - Who delivered the messages of Allah and feared Him, and feared none save Allah. Allah keepeth good account. Muhammad is not the father of any man among you, but he is the messenger of Allah and the Seal of the Prophets; and Allah is ever Aware of all things. [AL-AHZAB (THE CLANS, THE COALITION,THE COMBINED FORCES) Chapter 33 Verses 36, 37, 38, 39, 40]

Here goes the Ashraf Theory of Sub-Continent Mullahs and their Fatwas and they as well in Gutter.

Prophet Mohammad (Peace Be Upon Him) said:

"A woman may be married for four reasons: her wealth, her lineage, her beauty or her religion; choose the one who is religious, may your hands be rubbed with dust! [Bukhari and Muslim]

Prophet Mohammad (Peace Be Upon Him) said: "If there comes to you one with whose religious commitment and character you are pleased, then marry your daughter to him; if you do not do so, it will be a cause of fitnah and widespread mischief on earth."[Tirmidhi and Ibn Majah]


That Rascal Sufi Ali Hajveri aka Data Ganj Bukhsh [through the source of notorious Tabari who in his Tarikh al-Tabari (History of the Prophets and Kings) and Tafsir al-Tabari - Commentary on Quran cocncocted this lie of Love Story between Mohammad and Zainab (Perish the thought)] of Lahore in his book Kashf al Mahjoob ("Unveiling the Veiled") has repeated the concocted tale of love story of Mohammad and Zainab [Perish the thought] that is being propagated by all an sundry. This Rascal's Shrines is visited by the so-called Muslims of Pakistan to get their work done.

There is no such thing as adopted son or daughter in Islam. Zaid and Zainab had differences with each other like normal couple but they couldn't live as happy couple therefore Zaid divorced her. Mohammad tried to intervene for compromise b/w husband and wife but Zainab was not ready to compromise therefore the Allah ordered in Quran {Verse: 37 Soorah Al-Ahzab-The Confederates} to marry with Zainab, then Mohammad married with Zainab. It is further mentioned here that Zainab marriage with Zaid was itself conducted and arranged by Mohammad {PBUH}. [{Ref: JILA UL IFHAM FIS SALAT WASSALAM ALA KHAIRUL ANAM BY IMAM SHAMSUDDIN ABU ABDULLAH IBN QAYYAM AL-JOZIYA translated by Qazi Muhammad Suleman Salman Mansoorpuri, Fomrer Session Judge Patyala India}