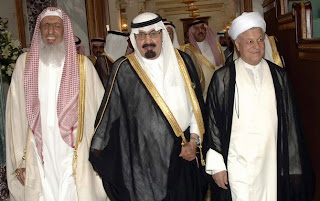 Rafsanjani in Saudi for Islamic Conference [watch the video]

... I tell you that there are many things in common and there's no need to look at differences Akbar Hashemi Rafsanjani

A delegation from Iranian Constitutional bodies -- Assembly of Experts and the Expediency Council -- accompanying Rafsanjani also conferred with Saudi officials on issues of mutual interest.

Rafsanjani, who is in holy Mecca to attend International Conference on the Islamic Inter-faith Dialogue, said that the initiative to hold inter-faith dialogue will be effective to find ways to remove problems of the Muslim World.

The Expediency Council chief said creation of any kind of disunity and dispute in the Muslim World is a serious calamity to the Muslims.

Saudi King Abdullah appreciated Rafsanjani's presence in the conference and expressed hope that presence of his excellency and other dignitaries of the Muslim world would bring the Islamic countries together presenting appropriate ways to deal with issues of the contemporary world.

The King remarked that the works of radicals in printing worthless books against religions are "inappropriate" causing disunion among Muslims.

He also called for regular meetings between officials of the two countries to advance bilateral relations and consult on regional important issues.

The two sides also underlined the necessity of finding constructive ways concerning issues of Palestine, Lebanon, Iraq and Afghanistan and setting up a panel of Ulema of the Islamic countries, especially Iran and Saudi Arabia, to ease sectarian rifts and continuous exchange of views to take important decisions on the region.

Iran's former president and Experts Assembly Head Akbar Hashemi Rafsanjani was among other 500 Muslim dignitaries from more than 50 states who were present at the inaugural session of the Conference.

Rafsanjani is also to address the gathering on Wednesday, which will focus on Islamic roots of dialogue and will set future objectives.

In the first session, the participants will discuss "Islamic Rooting of Dialogue."

In the second session, the participants will discuss "Dialogue Approaches and Controls".

In the third session, the participants will discuss "Whom We Dialogue With." The session will be co-chaired by Mufti of Bosnia and Herzegovina Mustafa Ibrahim Sertic.

In the fourth session, the participants will discuss "Areas of Dialogue".

The session will be chaired by the Chairman of the Board of Trustees of the Islamic Da'wa Organization Abdulrahman bin Mohammed Sewar Al-Dahab.

Also, the participants will discuss a number of practical suggestions for dialogue mechanisms.

Rafsanjani arrived in Jeddah on Monday to participate in the Conference and hold talks with Saudi officials, including Saudi King Abdullah bin Abd al-Aziz As-Saud, and perform the minor Hajj pilgrimage.