Dr. Zakir Naik, Music and Salvation of a Wahabi. 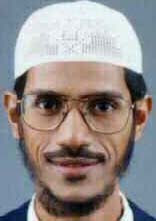 http://www.newageislam.com/NewAgeIslamArticleDetail.aspx?ArticleID=1077
Do you have any right to quote the Holy Quran when your Blog, which I Visited only yesterday, besides other things, announces that you are a lover of Western Music and also has links to the Music sites, now, is this a trait of a Muslim? As regard to my being worried about your salvation let me remind you that it is my duty to do Tableigh and feel care and concern for every brother in faith, my worries about your salvation can only be misplaced in case you are not a Muslim in your case that you continue to commit the same sin and say Allah swt forgives...doing a sin continually is greater sin Mr Amir...And yes western Music is prohibit I am surprised you did not know?[[Humrazz]

Answer are as under:

Please define the traits of a Muslim?

Do you include Qawwali [Spiritual Chants] in Music or not? If not then why? If Qawwali is Halal [Lawful] then why Music is Haram [Unlawful]

Listening to Music doesn't make you Kafir [Infidel] and it is a vice which can be forgiven by Allah but not Shirk [Polytheism] and I thank Allah for that I am not indulged in Polytheism [that is too by the Grace of Allah], because Allah says:

Lo! Allah forgiveth not that a partner should be ascribed unto Him. He forgiveth (all) save that to whom He will. Whoso ascribeth partners to Allah, he hath indeed invented a tremendous sin. [AN-NISA (WOMEN) Chapter 4 - Verse 48]

And (remember) when Luqman said unto his son, when he was exhorting him: O my dear son! Ascribe no partners unto Allah. Lo! to ascribe partners (unto Him) is a tremendous wrong [LUQMAN (LUQMAN) Chapter 31 - Verse 13]

I listen to Music without taking the cover of Sufism and I do it at my own expense and responsibility knowing the consequences in the life hereafter. By the way who will snatch this right from me of quoting Quran and Hadith and that too because of my indulgence in minor vice like Music. I wonder how would you justify the Sufi Music Festivals [in the name of Qawwalis and Qalandar Dances] held at different Shrines of so-called Saints of Allah, scattered all over India, Pakistan, Turkey and Iraq. Please do comment on my views on Music.

Music in Islam: Lawful or Unlawful.

http://chagataikhan.blogspot.com/2008/11/music-in-islam-lawful-or-unlawful.html
Dont worry about my salvation because sometime Allah forgives even the worse Sinners like me:

On the authority of Jundub (may Allah be pleased with him), who said that the Messenger of Allah (PBUH) related:

A similar Hadith, which is given by Abu Dawud, indicates that the person referred to was a goldly man whose previous good deeds were brought to nought through presuming to declare that Allah would not forgive someone's bad deeds.

On the authority of Abu Mas'ud al-Ansari (may Allah be pleased with him), who said that the Messenger of Allah (may the blessings and peace of Allah be upon him) said:

A man from among those who were before you was called to account. Nothing in the way of good was found for him except that he used to have dealings with people and, being well-to-do, he would order his servants to let off the man in straitened circumstances [from repaying his debt]. He (the Prophet p.b.u.h) said that Allah said: We are worthier than you of that (of being so generous). Let him off. [Muslim, Bukhari and Nasa'i).

Listening to Music doesn't make any Muslim a Mushrik [Polytheist], by the way Western Music/Dance is Haram [unlawful] because Non-Muslim practice it but what about Qawwali and Sufi Dances of Whirling Rumi Dervish [Music is also used in these vices]? Is it not Haram [Unlawful] because Muslim do it or is there any permission given in Quran and Hadith regarding Sufi Music???

Regarding Sin and Allah's Mercy:

Lo! Allah forgiveth not that a partner should be ascribed unto Him. He forgiveth (all) save that to whom He will. Whoso ascribeth partners to Allah, he hath indeed invented a tremendous sin. [AN-NISA (WOMEN) Chapter 4 - Verse 48]

And (remember) when Luqman said unto his son, when he was exhorting him: O my dear son! Ascribe no partners unto Allah. Lo! to ascribe partners (unto Him) is a tremendous wrong [LUQMAN (LUQMAN) Chapter 31 - Verse 13]

On the authority of Anas (may Allah be pleased with him), who said: I heard the Messenger of Allah (PBUH) say: Allah the Almighty said:

O son of Adam, so long as you call upon Me and ask of Me, I shall forgive you for what you have done, and I shall not mind. O son of Adam, were your sins to reach the clouds of the sky and were you then to ask forgiveness of Me, I would forgive you. O son of Adam, were you to come to Me with sins nearly as great as the earth and were you then to face Me, ascribing no partner to Me, I would bring you forgiveness nearly as great at it. [Tirmidhi and in Musnad Ahmad ibn Hanbal).
Posted by Aamir Mughal at 11:41 AM