Last year, Mr. Sehbai and Mr. Abbasi lobbied in good faith to bring Pakistan's 'democrats' to power. Now these very 'democrats' - a mix of them - are making life threats against these two prominent journalists because of their work. Pakistanis need to watch this story closely. And my dear Mr. Sehbai and my dear Mr. Abbasi, I told you this before but you thought this was about supporting dictatorship.

Since you have initiated this debate so let me add more spice into it. Since you and your Spiritual Mentor Zaid Zaman Hamid are obsessed with Hindu Extremism and Zionism as well, also you and your Spiritual Mentor Mr Zaid Zaman Hamid have a very tunnel vision of Patriotism and have a knack for expoliting the Holy Name of Islam so let us discuss your latest obsession with Pakistan's Press Freedom as far as Mr Shaheen Sehbai is concerned [Mr Sehbai is often quoted by Extreme Right Wing Hindu Organization HVK (you cannot access their site from Pakistan and it is also a Tragedy of Pakistan that instead of facing the challenge our Society has a behaviour of Ostrich)].

Not a single word would be mine: 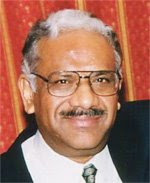 In 2005 Sebhai sent a letter to the newspaper's readers and viewers, announcing that he was closing the website of The South Asia Tribune after three years of service.

"Primarily it has been based on consideration of my own health and family circumstances. With age and growing health issues, I find it increasingly difficult to run the site, all alone, although I am proud to say that over the last three years a vast pool of committed writers, contributors and journalists has developed who have kept the SAT going.One basic purpose of this site was to demonstrate to the world that if one man decides and he is determined, he can make a difference. When this site started in August of 2002, no one could imagine that within a few months it would become of the most talked about web places in Pakistan and outside.Not only did the President of Pakistan himself mention this site in his public and private speeches, the Government of Pakistan officially gave advertisements in all newspapers asking the people not to visit the site or read and reprint its material. It was a recognition of our work, in a way.

In the following months the traffic on SAT grew by leaps and so increased the interest and contributions of hard hitting reports, articles and analyses. We broke international news and we were quoted by Pakistani and world media numerous times. SAT became a source of reference material for almost all books on Pakistan which have been published in the last about 30 months.From an individual effort SAT became a concept and a phenomenon and no one can deny that it became the “alternative forum” for any news about Pakistan which was either not published by the mainstream Pakistani media or was suppressed to a point it lost its original info value.We achieved so much credibility and popularity that not only Government officials or PIA executives or private sector sources sent us documents and information in bulk, we were amazed to find that senior Army officers involved in sensitive defense purchases were ready to risk their all and send us documents and information about one or the other on-going scandal or corrupt practice.Mainstream Opposition parties found SAT as a convenient and easily accessible source of information which would otherwise not be available to them in the local media in Pakistan. So SAT also became one of the prime sources of Opposition motions and questions in Parliament as well as references sent to the National Accountability Bureau against sitting Government functionaries.

All this goes on to prove that SAT had established the point that a focused and determined effort could rally like-minded forces to a cause, even if resources were limited or difficulties were gigantic.

Now I am retiring and closing this site, with the full confidence that someone from the younger generation, as determined as I had been, would pick up the thread from here and fill the vacuum which may be created by our closure.

I may state here in the clearest words that there is absolutely no pressure of any kind on me to close this site, because had that been so, my reaction would have been just the opposite. There is also no “deal” behind this move as many may speculate and allege because if I had been ready to make deals, I would not have been doing what I did for the last three years.

I believe that one should quit when at the top and this is exactly the point in announcing the closure of SAT now. While no one would believe, it is purely a decision made by me after considering a number of options and weighing all the pros and cons. One of them was to co-opt other partners in SAT, another was to sell the company to the highest bidder, while yet another was to change the SAT format and substance so that it could exist and “co-exist”.

I decided against all these options and with a very heavy heart decided for the best option, to close and move on.

I will be launching another project in due course of time, but for the moment I would say Goodbye to all SAT readers who have been visiting us in hordes and keeping it alive and kicking.

I also thank all those friends, journalists, writers, analysts and officials, all my secret sources of information, all the well wishers and supporters, who helped SAT achieve its name and credibility.

For all those young and up-coming journalists and writers who were looking up to SAT for inspiration and guidance, I can assure them that I will remain available to all of you in my personal capacity for any advice or opinion on any matter.

I must also thank all the international newspaper organizations including particularly the Committee to Protect Journalists, Reporters sans Frontieres, Human Rights Watch, Amnesty International, Human Rights Commission of Pakistan, Pakistan Federal Union of Journalists and Karachi Press Club who stood up for SAT at all difficult times and raised their voice. It was the greatest source of strength and support for me to keep going.

SAT would be on line for the rest of this month, till the end of October. On November 1, 2005 it will disappear from the Internet. All those who may be interested in keeping a record of any SAT article or report can save it any time before that date.

May God Bless You All."

Musharraf may be forced out, says Pak scribe Judith Smelser

This is what Shaheen Sehbai said in an exclusive interview with ANI. His personal history is pretty interesting. Last spring, he resigned as Editor of The News because of what he called was government pressure. But Sehbai’s departure from the newspaper was far from the end of his journalistic career. He moved to the USA because he feared government persecution, and soon started an online news magazine called the South Asia Tribune, which has published many items unflattering to the Pakistan government. Sehbai faced government pressure once again. Musharraf himself spoke out against the South Asia Tribune in a speech to community leaders in New York in September. And the next month, the Pakistani government placed an advertisement in all Pakistani newspapers warning the country’s Press against quoting articles from SAT. But the attempt, according to Sehbai, backfired. Sehbai is afraid to return home as long as Musharraf is in power. But he says Musharraf may be out of office before too long. He elaborated: “Peacefully, no, but I think there might be a situation where he may be forced to do. How soon, I can’t say, but things are brewing up because people are not happy in the political side, and are also not happy within the army. So if that continues to grow, I don’t know how soon, but he’ll have to be forced out, not step down.”

In a recent interview Shaheen Sehbai, former editor of The News — part of the Jang group — revealed that the ISI tried to get a report linking Omar Sheikh to the December 13 on the Indian Parliament attack suppressed. When The News carried the story anyway, the Government stopped advertising in all Jang group publications, and the proprietor was reportedly told to sack four journalists. Sehbai eventually resigned and, fearing for his life, decided to migrate to the US.