Mohammad Malick, currently the editor of the News in Islamabad.
Also The Host Of The Programme Kehnay Mein Kia Harj Hai? On Geo News http://pakistanherald.com/Profile/Mohammad-Malick-919

Courtesy: PKPOLITICS http://pkpolitics.com/
URL: http://pkpolitics.com/2009/06/03/journalist-corruption-scandal-mohammad-malick/
We always see the Journalists giving lectures on morality, ethics and pretending to be advocates of rule of law. These journalists will always highlight the wrongdoings of anyone else in the society, but when it comes to their own community, they unite and act as mafia.

Many of these journalists have received favours from other corrupts and criminals of society, acting as partners in their crimes. Not all journalists are corrupt but at least one crime has been committed by all the journalists, and that is the Silence to cover crimes of their fellows.

PKPolitics will make an effort to expose such black sheep to set a good example of Citizen Journalism and to bring out the hidden truth.

This is part-1 of a series of stories exposing scams and corruption scandals of some Pakistani Journalists. It is about a journalist who can be easily called the Al Capone of Pakistani journalism, Mohammad Malick. Some details with documentary evidences are attached on this page.

Details of his plot scams and benefits from different Governments are as follows:

3- Marketing Head of PTV with Rs 0.5 million per month salary under Musharraf Regime

a- According to official website of Board of Investment (BOI), http://www.pakboi.gov.pk/pak/xdetail.asp?ComID=41081 Media Magic is registered in the name of “Malik Muhammad Malick”. Muhammad Malick used to run his advertising business while being a journalist. He was among defaulters of PTV but no one could dare to ask him any question because of his journalistic influence. According to official documents [http://vid09.pkpolitics.com/files/Document-2.pdf] presented by the PTV before a subcommittee of Senate Standing Committee on Information Broadcasting, Media Magic defaulted PTV with an amount of Rs 15.311 million (5.343 + 5.615 + 4.353 = 15.311). 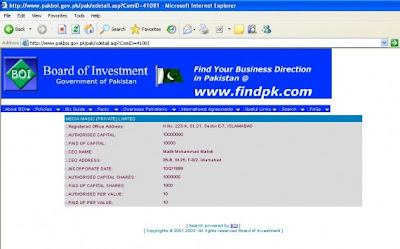 b- The other company Pink Production is basically registered in the name of Anila Malick, wife of Muhammad Malick. However, the business of this company was also controlled by Muhammad Malick according to almost everyone in PTV. According to same document http://vid09.pkpolitics.com/files/Document-2.pdf , Pink Production also defaults PTV with an amount of Rs 15.381 million ( 10.733 + 4.648 = 15.381 ).

Musharraf’s misrule of the last 9 years also saw a major development project on the land around the Rawal Dam, Islamabad as a Public Recreational Park.

The land allocated for the project was substantial and was located in an area with astronomical property prices. In off the record conversations, honest and upstanding CDA officials revealed that the whole project was a huge scam meant to grab this piece of real estate for the land mafia. Without the phony Public Park project, it would have been impossible for the land mafia of Islamabad to get their hands on this real estate because the original Islamabad Master Plan explicitly forbade its use for residential developments. According to reliable sources within the CDA, the allotments of portions of this land were made only to line the pockets of several high level power brokers within the Musharraf regime.

The unnamed CDA sources further reveal that the main beneficiary of this massive fraud was Muhammad Malick who got 25 acres of this land. In comparison, the remaining 9 parties got 3 to 9 acres in the same area. The allotment process of the land was completely fraudulent and without due process. Muhammad Malick dealt with different officials within the CDA using his influence. He used multiple channels of authority to get the 25 acres allotted to him by hook or by crook. Malick played his cards beautifully and one of his most ingenious maneuvers was to show himself as the sole proprietor/owner of a new company “Esp Initiatives”. This shell company had no documented experience in recreational real estate development while the regulations in the allotment process called for a company with extensive international experience in the field.

The CDA sources disclosed that the estimated earning potential of this piece of real estate was around Rs.62.5 million (Rs.6.25 Crore) while it was allotted to Muhammad Malick for the paltry sum of Rs.0.3 million (Rs.3 Lakhs) per annum. According to the CDA sources, this allotment to Muhammad Malick was the largest single land allotment to an individual in Pakistani history looking at land prices.

The lease agreement of this land between Muhammad Malick and CDA is attached in http://vid09.pkpolitics.com/files/Document-3.pdf
3- Marketing Head of PTV with Rs 0.5 million per month salary under Musharraf Regime

Malick joined PTV as its marketing head in 2007. His monthly package there was about Rs 500,000. He was at the same time running his own business of advertising agencies and become a defaulter of PTV in this regard as mentioned above.

During all this process, yet another wheeling and dealing was going on between CDA and FGEHF which was facilitated by non other than Muhammad Malick. This was meant to create some plots in luxurious sector I-8 of Islamabad where in fact no plots were available. Plots in these luxurious sectors, where price of a Category-1 plot measuring 500 square yards now approaches to Rs 30 to Rs 40 million, are created by finishing green belts and playgrounds. However, in this classic case some six plots were created by shifting six vacant plots of CDA official’s quota to FGEHF. Present CDA officers did so because the experience of recent years has shown that by the time CDA officials qualify for the plots after acquiring relevant experience they are transferred from CDA. According to this deal, which was finalized with mediation of Muhammad Malick, CDA officials and all the six members were given the offer of allotment of one plot each in far-flung sector G-14 so in return they were to create and give six plots to FGEHF. This story is available on The News Website with the heading “Complicated issue of plot allotments in Islamabad!”.

One of these plots in I-8 was also allotted to Muhammad Malick in return of his services during the deal. As everyone in CDA and all concerned government departments knew about this allotment to Muhammad Malick, which was made in complete violation of rules, DG-FGEHF had also verified this allotment on record. However, DG-FGEHF was left with no option but to shift this I-8 plot of Muhammad Malick in G-14 , as those journalists who were allotted plots in G-14 started compelling the whole government machinery to transfer their plots in I-8 as well.

Allottment of plot to Malick was completely illegal. He never applied for the plot. His application number on his allotment letter is given as “Zero”. While talking to the @admin of PKPolitics, he claimed that he had applied in 2004, but in fact he hadn’t applied and documents didn’t show his name even in the waiting seniority list which was prepared in 2005 after allotment of plots to 168 journalists under a devised and publicized policy. His application was later kept in the record in connivance of information ministry officials. His allotment was made secretly. He didn’t deserve a category-1 plot. No allotments could be made in sector I-8. Even in sector G-14 his allotment was illegal by all means made in complete violation of rules and regulations and secretly. It was made purely on the basis of his influence as being a journalist . His allotment letter is attached http://vid09.pkpolitics.com/files/Document-4.pdf.

Beside all this CDA officials say that after launching of a cellular company Zong last year, it was Muhammad Malick, who controlled all affairs of this company which were connected with CDA. He managed to get NOCs for the Zong towers erected in capital territory. Malik is known circles of CDA as Malick Zong. 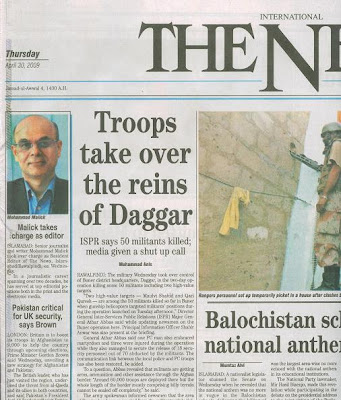 MORE ON KAMRAN KHAN - Kamran Khan is, was and will be the agent of agencies. He trapped Murtaza Bhutto on the orders of Brigadier Imtiaz and pursued Murtaza Bhutto to return to Pakistan [Benazir wasn't in favour of Late. Murtaza's immediate return]


Intelligence Unit of News International and its background


NOTE: On August 9, 1990, another one of the country’s short-lived experiments with democracy came to an end. While “The Empire Strikes Back” published in the August 1990 issue of the Herald describes the events that took place on the day of Benazir Bhutto’s ouster, “The Invisible War (See Herald Monthly Issue of January 2008, page 87), printed in the same issue, provides an analysis of the factors that led to the sacking of her government. [Courtesy Monthly Herald Pakistan January 2008, page 84-85-86]

Dear Aamir, I appreciate your efforts to unveil the truth especially those happening in media. keep it up. All the anti corruption activists are with you. M. Moosa Soomro. KAshmore