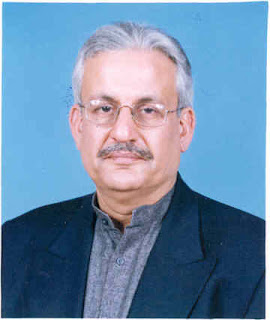 
Even if the General Elections 2008 are not rigged [that is a tall order] then what? because under National Security Council it woould be sham democracy.

Never in history has any Parliament been in such haste to abdicate its powers and sovereignty to the military as the current one seems to be doing, so graphically illustrated in the matter of the passage of the NSC bill, says lawyer and PPP Senator Raza Rabbani.

The passage of the National Security Council Act, 2004 has broken many a tradition. It has altered the civil-military equation to the advantage of the latter, it has ascribed to the armed forces a role inconsistent with the constitution, it is a law against the basic structure of the constitution, it seeks subordination of civil authority by law, and during its passage all norms of democracy and parliamentary practice were flouted.

The establishment has been toying with promoting and pressing for the concept of the NSC since many a year, but it has been the resistance of civil society that held it at bay until April 14, 2004. In 1985 General Zia introduced it as Article 152A in the RCO, but the Parliament of that time had the strength and moral courage to delete it as Article 18 in the Eighth Amendment. On January 6, 1997 the NSC reemerged under Farooq Leghari, only to be lost again under Sharif. After the October 12, 1999 takeover it resurfaced once more on November 6, 1999, and was reconstituted by the National Security Council Order 2001 (Chief Executives Order No. 5 of 2001).

In distinct contrast, the mind of the founding fathers is reflected in an office memorandum (No. 272/of/48) issued by the cabinet secretariat dated September 25, 1948 from Karachi. The office memorandum constitutes a defence committee of the cabinet under the Prime Minister. This is similar to the DCC that existed before the passage of this Act. The NSC is against the grain of a parliamentary system and an intrusion of an extra-parliamentary force upon the preserve of Parliament.

When the NSC proposal was put to vote, it offered civil society a unique opportunity to place the NSC under wraps - but for its 'turncoats.' It is for the first time that the internal contradictions between the civil-military bureaucracy and their traditional political allies, the religious right, surfaced. The main contributing factors for the split lay in the uneven application of the NAB law, the devolution plan and the Police Order 2002 for the civil bureaucracy, and the international events for the religious right. But the turncoats with their NAB cases, loan defaults and rank opportunism were there to provide more than a helping hand to complete the surrender of Parliament. Never in history has any Parliament been in such haste to abdicate its powers and sovereignty.

The effect of this Act will be that the basic structure of the constitution i.e. federal, parliamentary and democratic will be altered. The federal character and provincial autonomy are infringed upon as "government" in the Act means federal and provincial governments. Thereby, the NSC is able to consult, formulate recommendations and do crises management of provincial governments. It replaces the parliamentary system with a quasi-presidential system, the return to One-Unit. This Act has to be read with the discretionary powers of the President conferred under the Seventh Constitutional Amendment Act. The President as chairman of the NSC and as chairman of the National Command Authority becomes an over-emphasised office
with no check or balance, in total negation of the parliamentary system. The democratic character of the constitution is affected the moment the political will is made subordinate.

The extent and ambit of the new law was described by General Musharraf when in August he said, "the National Assembly consists of 342 members, hence decision-making is not possible, but a cross-section of views can emerge. These views would then be considered by the NSC in formulating policy." He again said on June 30, 2003 in Los Angeles, "the LFO will ensure a vital role to be played by the NSC."

The present government talks of the NSC being present in the US and India. What they forget is the fact that these are societies where the armed forces are subordinate to the political will and are not contenders for power. Further, no uniformed person is a member of these councils. In Turkey, the situation is different. The chief of general staff is appointed on the advise of the council of ministers, the NSC formed under Article 118 of the constitution is only an advisory body on the policy of national security - the word used is "policy." The advise tendered is sent to the council of ministers which may accept or reject the same, the final arbiter as to whether the advise is acceptable or not to the cabinet, which is answerable to Parliament. The concept of the supremacy of Parliament has been preserved in the Turkish model.

To say that the NSC will prevent further martial laws is belied by history. The 1956 and 1962 constitutions of Iskander Mirza and Ayub Khan were products of the thinking of the establishment, but in the end the authors of these constitutions themselves asked for their abrogation. The chief of army staff was also made a cabinet minister but this did not prevent the imposition of martial law. In the scheme of the 1973 Constitution there are only two players in the power equation: the President and the Prime Minister. The role of the armed forces has been defined in Article 245.

The Act states that a National Security Council shall be established to serve as a forum for consultation on matters of national security including sovereignty, integrity, defence and security of the state. All these terms are vague and each itself carries wide implications leaving no sphere of governance beyond their ambit. The icing on the cake comes with the term 'crisis management.' This is an all-encompassing omnibus phrase and covers everything under the sun. Thus the NSC will formulate policy on any and every aspect of government policy.

In conclusion the new law


c) infringes on the sovereignty of Parliament


f) through inference introduces a unitary form of government


i) by presiding over the NSC, the President makes the Prime Minister an equal among equals, which is a negation of the parliamentary system.