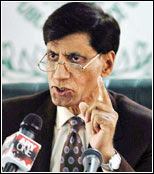 For your kind perusal,

“What a nonsense that a retired soldier could not differentiate between chemical weapons and phosphorous grenades. The retired general in fact needs a new course to know the difference between the two,” Qureshi said. He said if Lt Gen (R) Jamshaid Gulzar Kiyani had reservations against the Kargil operation, he should have the courage to speak against the same. He never uttered a word then. He also came up with double talk on briefing the former Prime Minister Nawaz Sharif on the Kargil operation and asked as to why Mr Kiyani did not resign if he was true to his claim. “This gentleman availed every offer during the last eight years by remaining on key posts including corps commander and chairman Federal Public Service Commission but has now chosen the other path for some ulterior motives. He did not talk from his head but it reflected that he was speaking for someone else,” charged the presidential spokesman. [1]

The News International on Lal/Hafsah Mosque: 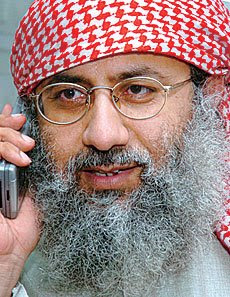 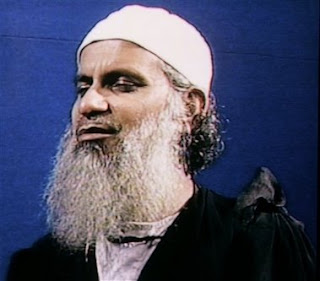 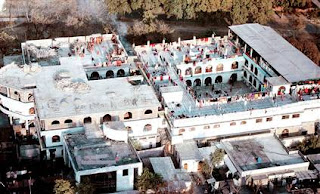 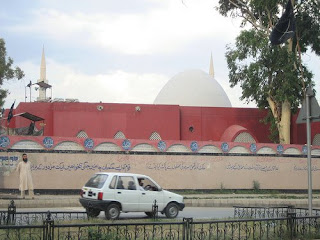 How Ghazi brothers got hold of seminaries By Umar Cheema

ISLAMABAD: There is a general misconception that the Lal Masjid clerics who are making the headlines nowadays owe their 'glory' to the blessings of intelligence agencies. The facts tell a different story.

It would be interesting to know how Maulana Abdullah, the late father of the Ghazi Brothers 'maneuvered' to get the Khitabat of Lal Masjid and Jamia Faridia. Equally interesting would be to know why masjid and madrasah were respectively named as Lal Masjid and Jamia Faridia. It was the late Field Marshal Ayub Khan, the country's first military ruler, who got appointed late Maulana Abdullah as the prayer leader of Lal Masjid, on the advice of his spiritual guide, Pir Sahib of Deval Sharif.

Jaafar Brothers, one of the leading industrialist groups of the country who had constructed Jamia Faridia, in order to show reverence to the great Sufi Saint Khawaja Ghulam Farid named the seminary after him. It was handed over to the Maulanas by the then secretary CBR, Syed Hassan Akhtar. The land for Jamia Faridia was allotted during the late Gen Zia's regime.

This was due to the blessing of Pirs that Lal Masjid Maulanas could manage to take over these religious seats. A graduate of Jamia Binnoria, Karachi, late Maulana Abdullah landed in Rawalpindi soon after President Ayub Khan took the decision to shift the capital to Islamabad. He took oath of allegiance to the then Pir of Deval Sharif, Muhammad Abdul Majid. This was a significant move on part of a Deobandi Maulana.

The information has been verified by the son of Pir Deval Sharif, Rooh-ul-Husnain Moeen and coordinator of Auqaf Department, Syed Muhammad Ali Wasti who says that many people told his father about the religious school of thought of late Maulana Abdullah, but Pir Sahib gave no importance to the point and considered and treated him like a changed man.

Maulana Abdullah served as the prayer leader in the mosque of Pir Sahib and later requested him to exercise his spiritual influence over his disciple, Gen Ayub.

Pir Sahib Deval Sharif helped Maulana Abdullah in his appointment as Khateeb of Lal Masjid. The Auqaf Department later took over Lal Masjid, but Maulana's religious dynasty kept on flourishing unhindered. It was during Zia regime that Jamia Faridia was established. As the story goes, a partner of 'Jaafar Brothers' dreamed that he was at the tomb of Khawaja Ghulam Farid and that a river full of water was flowing around. He shared the dream with Syed Akhtar Hassan, the-then secretary CBR, and sought his interpretation of the dream.

Akhtar termed the dream as a good omen and advised him to build a seminary and name it after Khawaja Ghulam Farid. Jaafar did accordingly. Akhtar helped him acquire the land from the government of late Gen Zia. Admiral (retd) Muhammad Sharif, whose son-in-law (Sha'aban Shoukat) these days is running a massage center (spa) in Super Market, had then allotted this
land. Interestingly, Lal Masjid brigade had raided an alleged prostitution den and then a massage center. However, the massage centre of Sha'aban Shoukat was not touched. Sha'aban was a CBR officer and left the CBR job to start this apparently lucrative business. The CBR secretary handed over the management of the Jamia to Maulana Abdullah and since-then the seminary
has been under the command of the family.

Why Lal Masjid was so called? Some say that it was named after Lal Shahbaz Qalandar, a highly revered saint of Sindh buried in Sehwan Sharif. This may well have been a ploy of the military government of Ayub Khan to please the people of Sindh who were not at all happy with the shifting of the capital from Karachi to Islamabad. It was most probably due to this reason that its walls were painted with red colour.

The real reason behind this sudden love of Lt General Retd. Jamshed Gulzar Kiyani for Constitution, Civil Liberties, Democracy, Rule of Law, and Independent Judiciary in Pakistan is nothing but Monetary Benefits for the Ex Servicemen Society and hiding the Criminal Past of many in Servicemen Society. These men have earned Millions if not billions under the same General Musharraf whom they want to try for treason. General Jamshed never mentioned Operation Cleanup in Baluchistan [aren't these Baluchs Pakistanis? and by mistake they also happen to be Muslims as well] particularly the Extra Judicial Killing of Sardar Akbar Bugti [if he was guilty then he should have been put on trial even in the Military Court]. General Jamshed restricted himself to Lal Mosque and Kargil [isn't Baluchistan in Pakistan?], why? Does military training snatch the sense of history, passion, and mercy.

The wannabe heroes By Ayesha Siddiqa

So, the onlookers have to be careful in distinguishing between the need to investigate the Kargil crisis and the actual intent of people like Gen Jamsheed Gulzar Kiyani and others in telling the story now. The good general sat silent all these years enjoying his stint as head of Fauji Foundation’s company Marri Gas and then as the chairman of the Federal Public Services Commission. The question is that why didn’t he ask any question then? The retired officers defended the economic, political and social power of the armed forces and defended the organisation’s control of the state. They even mentioned the military’s right to ten per cent jobs as granted by the constitution which is an absolute fallacy. The ten per cent quota was granted by Gen Ziaul Haq and is mentioned in the Establishment code of the government and not in the constitution.

An ex-servicemen society has been launched. Alas, a watering hole has been provided for these endangered species who fear extinction unless they strut about and flap their tired old feathers trying to make waves.

Do men have a bad hair day? The four I watched last week on television certainly appeared as having one. Getting into each other’s hair, the quartet exposed itself to being men of straw and not steel as they have always tried portraying themselves.

Bereft of uniform and all the trappings that go with an army general, they came across churlish, even infantile. Why do retired generals get hardened and macabre? Why do their eyes turn flinty and laser hate, venom and anger? Why do they dye their hair boot-polish black? Why do they blow dry it? Why do some (Pervez Musharraf and Rashid Qureshi) wear their hair in a bouffant while Gulzar Jamshed Kiani prefers a funny mop that sits uncannily on his forehead?

Looks aside, what’s in a name? Plenty! President Musharraf and his spokesman, hawk-eyed General (retd) Qureshi beat one point to death last week: why had Jamshed Gulzar (JG) decided to add the suffix Kiani after his name? Both said that since the real McCoy was a Kayani, as in Army Chief General Ashfaq Parvez Kayani, JG of late started calling himself JGK! Imagine the ‘impudence!’ Musharraf went to the extent of saying that this chap who is now calling for Musharraf’s impeachment came from a humble background and it’s the army that gave him distinction. JG must not forget his pedestrian antecedents. Ahem… Musharraf himself comes from a similar background.

The last general under discussion is Hamid Gul. He always looks and acts very angry. What’s his problem? Other than making umpteen TV appearances and putting himself on a pedestal, high above everyone else, what great service has this general done ever since he left the army? Sinister things happened when he was at the helm. Sketching doomsday scenario is all this one can do.

An ex-servicemen society has been launched. Hurrah and three cheers! Alas, a watering hole has been provided for these endangered species who fear extinction unless they strut about and flap their tired old feathers trying to make waves. Leading this retired pack are retired generals Faiz Ali Chisti (whose name sent shivers down our spines during Zia days); Aslam Beg (an arrogant iconoclast) and Asad Durrani (slippery as an eel).

These men have skeletons rattling in their cupboards and the one who has threatened to open up their cupboards to show us the skeletons is none other than Pervez Musharraf. He says it’s a long tale consuming “weeks of revelation” on these ‘unsavoury’ characters and the ‘dirty role’ they played while in service.

The million-dollar question: who will beat whom to the finish line? Will it be this pack of angry old men who will tear away the veneer behind which the president currently squats to gloat or will it be the president who will knock each down with evidence of wrongdoing that these men may find difficult to defend? They may go back to their holes with tails between their legs?

My educated guess is that Musharraf’s war chest against them is empty. It’s hollow. Otherwise by now spokesman Qureshi would have leaked out some dirt to his favourite hacks. Nothing has been forthcoming from the presidency. Which may mean there’s nothing to reveal.

Remember the references Musharraf filed against Iftikhar Chaudhry? In the end all that dope that the agencies had collected and photographed on the CJP got thrown out by the 13 member bench headed by Justice Ramday (who paid for his act of defiance by being sacked). Not only that, Justice Chaudhry was reinstated and brought back as the CJP in style. One hoped Musharraf would quit after this defining defeat. But he stayed and dug a dagger in the CJP at the first chance he got on November 3, 2007. Hell hath no fury like an old man scorned.

There’s another category of species in danger of extinction. Let’s bring them in as they gasp for breath and cling to any straw that can give them a ride through the corridors of power once again. These are men who represented us abroad. When in service, so busy were they serving the man in uniform, i.e. General Pervez Musharraf, that they had no time to deal with ordinary folks like you and me.

Today, they have all the time to blast Musharraf because they want to remind Asif Zardari that they can still play a role should he have some slots vacant for them. Former foreign secretaries Shamshad Ahmed Khan and Riaz Khokhar are in the forefront organising a group of retired diplomats to rise up and be heard.‘Play it again, Sam’ but save us from the fury of old men scorned. They don’t make a pretty picture.