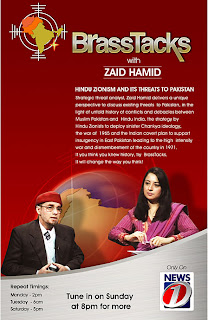 aa. This is Zaid Hamid here.

We have so daringly attacked Indians, Israelis, CIA and Baitullah that Pakistanis all over the world have gained hope and sense of pride. I have not supported Musharraf at all, only explained the points which made Americans look for alternate to replace him. these are geo-political realities and not personality dependant.

I am amazed the way Mr Zaid Hamid daringly lie through his teeth. I wonder why is it so that our Military Dictators always help Israel but Mr Zaid Hamid 'CONVENIENTLY' miss the such coonivance of Pakistani Military Dictators with the US. Mr Zaid Hamid if I am not wrong belong to Islami Jamiat Tulaba i.e. Jamat-e-Islami whose spiritual Head Pope Mullah Abul Ala'a Mawdoodi was very closed to General Ziaul Haq [1977-1988] and JI Former Ameer Mian Mohammad Tufail was General Zia's Maternal Father in Law. General Zia was also very close with the God Father of Neo-Zionists/Neocons i.e. Dr Henry Kissinger, he is a Zionist and on his orders General Zia, JI, and Pakistan National Alliance created anarchy against Bhutto because Bhutto was trying to attain Nuclear Power for Pakistan - Remember what Kissinger said to Bhutto for this Nuclear Capability, We will made horrible example of you. Kissinger succeeded with the help of General Zia and Zia with the connivance of JI, PNA and Judiciary, have Bhutto murdered.

Dear Mr Zaid you often exploit Islam and Islam tells us not to lie and hide the truth no matter what and you are misguiding whole nation that too through live television. Quran says:

O ye who believe! Be ye staunch in justice, witnesses for Allah, even though it be against yourselves or (your) parents or (your) kindred, whether (the case be of) a rich man or a poor man, for Allah is nearer unto both (them ye are). So follow not passion lest ye lapse (from truth) and if ye lapse or fall away, then lo! Allah is ever Informed of what ye do. [AN-NISA (WOMEN) Chapter - 135]

O ye who believe! Be steadfast witnesses for Allah in equity, and let not hatred of any people seduce you that ye deal not justly. Deal justly, that is nearer to your duty. Observe your duty to Allah. Lo! Allah is Informed of what ye do. [AL-MAEDA (THE TABLE, THE TABLE SPREAD) Chapter 5 - Verse 8]

If we even go back when this Rampant Jamat-e-Islami Activist Ziaul Haq was Brigadier, he did a great service for Israel [Like General Musharraf did for American Zionist Jack Rosen U.S. Jewish leader Rosen visits Pakistan to support Musharraf By Marc Perelman, Jewish Daily Forward http://www.haaretz.com/hasen/spages/928287.html during late 60s. General Zia helped the Zionists. Read before jumping for the gun.


According to Gen Mitha, it was Gul Hasan who saved Brig Zia-ul-Haq, as he then was, from being sacked. Zia was in Jordan. The year was 1971. Gen Yahya received a signal from Maj Gen Nawazish, the head of the Pakistan military mission in Amman, asking that Zia be court-martialled for disobeying GHQ orders by commanding a Jordanian armour division against the Palestinians in which thousands were slaughtered. That ignominious event is known as Operation Black September. It was Gul Hasan who interceded for Zia and had Yahya let him off.


Toward the end of 1981, Zia remarked: Pakistan is like Israel, an ideological state. Take out the Judaism from Israel and it will fall like a house of cards. Take Islam out of Pakistan and make it a secular state; it would collapse. He likewise surprised many observers in March 1986, when he called on the PLO to recognize the Jewish state. As discussed elsewhere, he was actively involved both in the 1970 Black September massacre of the Palestinians in Jordan as well as in Egypts re-entry into the Islamic fold more than a decade later. From 1967 to 1970 our Commander of the Faithful Late. General Muhammad Ziaul Haq was in Jordan in Official Militray Capacity and he helped late. King Hussain of Jordan in cleansing the so-called Palestinian Insurgents, Zia and Hussain butchered many innocent Palestinians in the name of Operation against Black September {a militant organization of Palestinians}. The intensity of bloodletting by Zia ul Haq and King Hussain was such that one of the founder father of Israel Moshe Dayan said:

King Hussein (with help from Zia-ul-Haq of the Pakistani army) sent in his Bedouin army on 27 September to clear out the Palestinian bases in Jordan. A massacre of innumerable proportions ensued. Moshe Dayan noted that Hussein "killed more Palestinians in eleven days than Israel could kill in twenty years." Dayan is right in spirit, but it is hardly the case that anyone can match the Sharonism in its brutality.

He told Zia about his experience the previous year when the Israelis had shown him the vast stores of Soviet weapons they had captured from the PLO in Lebanon. The weapons were perfect for the Mujahideen, he told Zia. If Wilson could convince the CIA to buy them, would Zia have any problems passing them on to the Afghans? Zia, ever the pragmatist, smiled on the proposal, adding, Just don’t put any Stars of David on the boxes {Page 131-132}.
Posted by Aamir Mughal at 12:09 PM