Benazir Bhutto: Before her death - 17 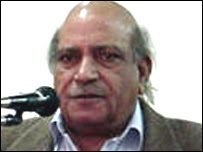 The people again done in? By I.A. Rehman

Quite a few people believe that on the fourth of October, in the year 2007, Zulfikar Ali Bhutto’s party was stabbed in the back by none other than his daughter and that the injury may prove fatal. Did the 40-year-old party that had begun by holding up the promise of people’s empowerment deserve to spend its adult years as the bonded maid of a praetorian consul?

While the country was going through a convulsion on whose outcome depended the future of its young ones, the PPP had three concerns on the top of its agenda: the people’s right to democracy, the party’s prospects in the coming general election, and the possibility of its chairperson’s rehabilitation in active politics — in that order.

The chairperson seems to have chosen to read the priorities upside down. As she bargained for reprieve for herself, she rendered the party more vulnerable than before and the prospect for democratic revival bleaker.

Many in the party had hoped that the chairperson would give the organisation a new lease of life and democracy a chance by stepping out of the power race and letting the Young Turks lead what is left of the great party. Frustrated, they do not know how to defend an indefensible deal.

There were also many, inside the party and outside, who had, at the very first reports of the deal, warned of a kiss of death. During the weeks that the deal took to materialise this warning was justified many times over.

Those who have persuaded themselves to believe that the deal will benefit Pakistan or the PPP may be in for early shocks. The ordinance that is being hailed for reconciliation between Gen Musharraf and Benazir Bhutto is most likely to further alienate the people from both. Besides, the General’s team will ensure that his promises to BB — removal of bar to a third bid for premiership, etc. — are put on hold till after the electoral contest, which the PPP will enter with a thin force of bedraggled soldiers. If it does not do well enough at the polls, the General is likely to renege on his pledges to BB as comfortably as he had abandoned MMA after the pact leading to the 17th amendment. The party faithful will then be left to ponder what Ghalib had said over a century ago:

Benazir Bhutto was right when she identified quasi-religious militancy as the most serious threat to Pakistan and argued that the country could be saved only by the people, backed by civilian democratic government. But the regime with which she has pawned her soul is capable neither of preventing Pakistan’s Talibanisation nor of establishing a popular democracy. The threat to the state has increased.

The other party to the deal is unlikely to fare any better than the PPP. The General’s victory is as pyrrhic as pyrrhic can be. He will not be as strong and as free a ruler as he has so far been. Attempts to run the country as before will make the going much tougher.

At the same time the events of the past few weeks will give rise to new political forces and the next round between democrats and autocrats may take place sooner than expected and may not end the way the last one has.

However, the fate of the deal-makers will matter to the people less than their own ordeal. The people’s disappointments over the past few weeks will severely affect their activism that the lawyers’ agitation had engendered. Between March 9 and September 29

Pakistan politics went through a cycle that has certain basic lessons for the hardy democrats.

The lawyers’ courage out in the open helped them win people’s support and by July 20 the regime seemed to have been routed. But then the streets were emptied of the democrats and the gendarmes moved in. They had a dry run on September 10 when Nawaz Sharif was cheated out of his birthright, contrary to everything contained in the Constitution, laws and rules of decency, and the people watched passively while their half-baked leaders sulked under detention.

Assured that the people were not returning to the streets, the regime showed its hideous face on September 29, one of the blackest days in the history of Pakistani people. The opposition fell back on the rhetoric of its leaders and a strategy of blocking General Musharraf’s election by resigning from legislatures. This manoeuvre was a non-starter to begin with and the delay in carrying it out made its defeat certain.

In the process the experts found the Constitution silent on the effect on the presidential election if a provincial assembly stood dissolved. The Indians had been alive to this eventuality and therefore they made it clear in the constitution that the dissolution of a state (provincial) assembly would not affect the election of the president. But this provision offers little help to Sher Afgan.

A state in India represents only 1/17th of the provincial part of the electoral college whereas a province in Pakistan represents 1/4th of the provincial component of the electoral college. All this constitutional and legal quibble apart, the essential fact is that the battle for the people’s right to self-rule will be won neither in courts nor in assemblies of doubtful origins; this battle will be won by people’s mobilisation alone.

The democrats are on the verge of another defeat because they have been looking for short-cuts to democracy where none are available. It’s time to return to the basics of mass mobilisation through serious political work.

The ball is now in the court of the third umpire By M. Ziauddin

The post-press conference air at the policeman-turned-tycoon’s Edgware Road apartment in London was far from jubilant. Those PPP stalwarts who in recent months were seen raising full-throated ‘Go Musharraf Go’ slogans on the streets of Pakistan seemed to have lost their voice. Most appeared to be wanting to disappear from the scene as fast as they could. And those who stayed back and were strolling aimlessly in the lane in front of the apartment looked as if they were coming straight from the funeral of a near and dear one.

Senator Raza Rabbani, the Leader of the Opposition in the upper house, was nowhere to be seen. Barrister Aitzaz perhaps anticipating the outcome had advisedly remained back home. Wajid Shamsul Hasan was seen standing all alone at the end of the street with the mobile glued to his ear. Sherry Rehman was unusually quiet. Even the evergreen Naveed Malik did not appear all that pleased. Naveed Qamar was seen leaving the venue very early.

And to be fair to Benazir Bhutto, she did not crack any jokes during the press conference. Normally a very good controller of her facial expressions, Ms Bhutto looked too serious for the occasion. Even Asif Ali Zardari who was in London and had attended the Wednesday session of the Central Executive Committee seemed to have preferred to stay away from the place.

Perhaps it was all an expression of uncertainty that had gripped the PPP leadership because it had yet to see the so-called National Reconciliation Ordinance promulgated and not because of any guilt they were feeling for violating the spirit of democracy by agreeing to participate in the elections being contested by an in-service COAS and legitimising the process.

But the one man who really looked very happy was Rehman Malik. And Mr Qasim Zia also gave fleeting looks of triumph. Though everyone with whom I talked to sounded not very happy, each one whispered into my ears that except for him and a few others, most of those attended the CEC meeting were happy with the decision. One said the happiest among them were from the Punjab.From the talks I had with a number of them I gathered that Ms Bhutto had carried the day against formidable opposition when she asked those who were for resigning what would be the PPP’s next step after that. I got the impression that no one had any concrete idea on this ‘morning after’ question. No one appeared to be prepared to accept it but it seemed that there was this realisation among the party leaders that not only the party was not in a position to launch a street agitation either all alone or along with other political parties, but also they thought that a free-for-all on the streets of Pakistan would only end up with the extremists hijacking the movement and turning it into bloody barbarism a la Iraq.

There was this feeling also among some that it was a victory which belonged neither to Ms Bhutto nor to General Musharraf but to the US and the UK. Washington and London appeared to have successfully pushed two extremely unwilling persons into a marriage of convenience in their own global interests. However, there also were those who said that although unwilling to join hands, the two, Ms Bhutto and General Musharraf, were motivated by their own self-interests -- one to return to power at all costs and the other to retain power at all costs. And that, they said, made this marriage of convenience into a non-starter from the word go.

Interestingly, a day earlier at a dinner given in her honour by a local think tank, Defence and Security Forum whose president, Lady Olga Maitland of Conservative Party, called it a farewell function for Ms Bhutto, the PPP Chairperson justified with a highly disingenuous argument Gen Musharraf’s insistence to keep the uniform while contesting the election. She said if he took off the uniform before the elections, he would be barred from contesting because of the two-year constitutional ban on taking part in politics for government officials after retirement. She seemingly ignored the fact that the relevant article has already been held non-applicable by the Election Commission in the case of General Musharraf.

So, the question why does he want to retain his uniform while contesting elections when according to his own submission to the Supreme Court he would take it off before taking oath of office is still agitating the minds of many. Indeed, many PPP stalwarts were wondering loudly why did he want to keep the uniform only for the next 40 days? Does he have some very important governance issue to address which he cannot do without the uniform, they asked. But whatever that job, one cannot but wonder if it was bigger than protecting the Constitution which would be severely damaged by a uniformed general commanding the Pakistan Army and in the pay of the government contesting elections for the country’s highest bipartisan office against civilians. And Gen Musharraf has taken oath both as the COAS and the President to protect that Constitution.

Perhaps this is why the Supreme Court has decided to go into the matter thoroughly and ordered that the results of October 6 elections be held in abeyance until it hah given the final ruling in the case. This has turned what had appeared to be a hotly contested match into one which has gone beyond the last ball. The contesting teams are in dispute over what had happened on the last ball and the match referee has referred the issue to the third umpire. So, the result of the match will depend on the verdict of the third umpire.