Where has gone now the so-called Shariah which Ansar Abbasi was trying to defend while defending Sufi Muhammad, Flogging and Taliban while reciting Quranic Verses of Surah-e-Nur[AL-NOOR (THE LIGHT) Chapter 24 from Quran] and what a fun he was reciting Surah Nur Verses to an Unveiled [BAYPARDAH] GEOTV News READER [I wonder where have gone all the verses of Quran regarding Veil]..

Talibani and Pro Jamat-e-Islami Journalist - Ansar Abbasi of GEO TV/THE NEWS INTERNATIONAL/JANG Group defending the flogging in a worse possible way in the guise of Quranic Verse of Chapter 24 - AL-NOOR (THE LIGHT) as if there is only flogging in Quran whereas the same newspaper and its TV Channel [GEO TV/THE NEWS INTERNATIONAL/JANG Group] violate every verse of Quran in their every news report and we haven't seen Ansar Abbasi objecting on these violations. Mufti Ansar Abbasi’s Favourite NON-PCOED JUDICIARY differ with Mufti Ansar Abbasi [The News International/GEOTV/JANG]'s version of Islam and wait for Fatwa of apostasy from Mufti Ansar Abbasi against the learned Judge Chief Justice Lahore High Court Khwaja Mohammad Sharif. 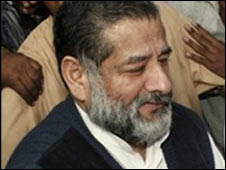 RAWALPINDI, April 11: The flogging of a teenage girl in Swat does not portray the true picture of Islam as it is not clear whether or not the exact procedure for convicting her under religious laws was adopted and who had issued the Hadd and under what authority.

The recently reinstated judge of the LHC said irrespective of the fact whether the video was real or fake, it was a conspiracy to malign Islam and bring a bad name to Pakistan showing the world that Islam was a religion of extremism.

Mr Sharif, who was called chief justice of the LHC by the bar representatives, said Islam had laid very strict procedure to implement Hudood laws, almost making it impossible to apply.

He questioned under what authority the girl was flogged and what procedure was adopted to declare her guilty. The justice said Islam demanded four witnesses with immaculate character for conviction or the confession of the accused person.

Thanking lawyers for their unflinching support for the restoration of the deposed judges, he said the reinstated judges would try their utmost to fulfil the confidence and faith reposed in them by the legal fraternity.

The president of the HCBA highlighted the role of Prophet Muhammad (peace be upon him) as a legislator and a judge, saying the whole world has been taking benefit of the Islamic laws.

The bar also arranged a Naat competition taking one lawyer from every district of Rawalpindi division. The competition was won by Chaudhry Zubair from Chakwal. The function was attended among others by four judges of the LHC, four session judges and lawyers.

The DBA in protest did not participate in the function after its executive body in a meeting termed the invitation of PCO judges to the bar an attempt to divide the lawyers.

Some lawyers distributed written material crticising the administration of the HCBA for inviting the PCO judges and were confronted by some other lawyers that resulted in a scuffle. Majority of the lawyers left the venue without attending the function.