US also responsible for crisis in Pakistan - Hillary Clinton 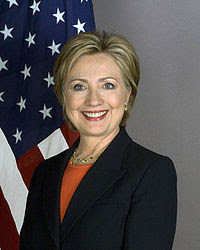 US Secretary of State Hillary Clinton

ISLAMABAD: US Secretary of State Hillary Clinton on Friday said the US was also partly responsible for the present conditions in Pakistan as it had virtually abandoned the country after the Soviets left Afghanistan.

“It wasn’t a bad investment to end the Soviet Union, but let’s be careful what we sow, because we will harvest. So we then left Pakistan. We said, okay, fine, you deal with the Stingers that we’ve left all over your country. You deal with the mines that are along the border. And by the way, we don’t want to have anything to do with you,” Clinton said while testifying before a Congressional committee according to a foreign television channel. After the downfall of the Soviet Union, Clinton said the US stopped dealing with the Pakistani military and with the ISI. “We can point fingers at the Pakistanis, but the problems we face now, to some extent, we have to take responsibility for having contributed to,” she said.

Clinton said the US has a history of moving in and out of Pakistan. “I mean, let’s remember here, the people we are fighting today we funded 20 years ago. We did it because we were locked in this struggle with the Soviet Union. They invaded Afghanistan, and we did not want to see them control Central Asia, and we went to work,” she said. “It was President (Ronald) Reagan, in partnership with the Congress, led by Democrats, who said, you know what? Sounds like a pretty good idea. Let’s deal with the ISI and the Pakistani military, and let’s go recruit these Mujahideen. And great, let’s get some to come from Saudi Arabia and other places, so that we can go beat the Soviet Union. And guess what? They retreated. They lost billions of dollars, and it led to the collapse of the Soviet Union,” Clinton said. And what is happening in Pakistan today is a result of that policy, she acknowledged, so the US should also take a part of the responsibility.

Separately, the chairman of the US Joint Chiefs of Staff said in an interview broadcast on Friday that he was “extremely concerned” about the Taliban’s recent moves closer to the Pakistan’s capital (Islamabad).

“We’re certainly moving closer to the tipping point” where Pakistan could be overtaken by Islamic extremists, Adm Mike Mullen said in the interview with the NBC television. Mullen was interviewed earlier on Friday in Afghanistan.

Mullen said he hoped the arrival soon of an additional 17,000 American combat troops in Afghanistan will stabilise things there and in neighbouring Pakistan. “We’re going as fast as we can go right now and we want to get it right,” he said on the NBC. But Mullen also said the Afghan people “have to take over security for their nation”.

“That’s the only way we’re going to be successful.” Mullen said he shared the sentiments of Secretary of State Hillary Rodham Clinton, who told a House committee earlier this week she believes the Pakistani government is “basically abdicating to the Taliban and the extremists.”

Meanwhile, a top US commander on Friday acknowledged that reducing Pakistan-India tensions was critical to getting Islamabad focus more effectively on its fight against terrorists along the Afghan border. He said special envoy Richard Holbrooke’s portfolio very much includes India.

“There are people, who have rightly said that ambassador Holbrooke’s title should be Afghanistan, Pakistan and India. Now, let me just tell you his portfolio very much includes India and, in fact, the Central Asian states and the other neighbours there,” Gen David Petraeus, Commander US CENTCOM said during a hearing of a House appropriations sub-committee.

“It is very important to reduce tensions between India and Pakistan so that again Pakistan can both intellectually and physically focus on the most pressing threat to their existence, which again is the internal extremist threat, rather than the traditional threat of India,” he stated.

“We should observe that the Lashkar-e-Taiba, the group LeT that carried out the Mumbai attacks, we think they’re trying to do more damage and they’re trying to carry out additional attacks,” Petraeus told US lawmakers.

Warning of further attacks, Petraeus said the US expected “that extremists that are trying to cause that kind of tension and also to take (Pakistan’s) focus off of the internal extremist threat would indeed strive to do that.”

He said extremists already inside Pakistan pose the greatest threat to that nation. Petraeus said he wants Pakistani leaders to realise they need to learn how to fight internal extremists. Petraeus called India a “conventional threat” that should no longer be Pakistan’s top military focus.