The old PPP of Zulfi Bhutto was even worse. Do we even remember as to how Noted and very Respected Leader Mairaj Mohammad Khan [Former PPP Minister and Former Tehreek-e-Insaf Leader] lost his one eye due to the Torture by police during the government of Late. Zulfikar Ali Bhutto.

Founder Leader of PPP J A Rahim and his son, both were sodoemized in Police Custody and both were sodomized in front of each other.

I have severe Ideological difference with Mawlana Mawdudi and Jamat-e-Islami but Former JI Ameer Mian Tufial [General Zia was his maternal son-in-law] was also sodomized in Police Custody. These details are available in the newspapers published after the Departure of Zuflikar Ali Bhutto’s Government.

I wonder why do the present PPP leader raise hue and cry on Freedom of Expression in view of their track record above.

During General Zia’s Martial Law, paintings of Famous and a very excellent Artist Mr A R Nagori were banned and not only that General Zia’s Military Regime financially murdered him by putting Nagori under house arrest for Three Long years.

Paintings and Art Galleries of Famous Pakistani Artists like Sadequain and Colin David were butrned to ashes during General Zia’s Martial Law. 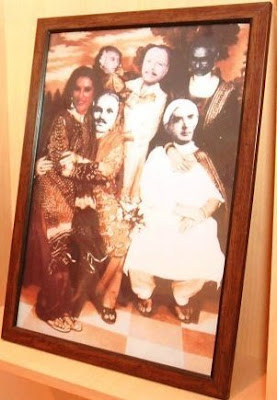 KARACHI, April 8: Bedlam erupted on the inaugural day of the Shanaakht Festival 2009 on Wednesday, as protesters had the cultural event shut down and resorted to violence in reaction to the display of art they termed offensive.

The art in question was a piece that depicted Pakistan People’s Party leaders Zulfikar Ali Bhutto and Benazir Bhutto – along with other past leaders of the country – in an unflattering manner.

As this reporter was exiting a photographic exhibition, a stampede was witnessed from one of the galleries of the Arts Council – the venue of the event – at around 8pm. Soon, enraged men emerged from the gallery carrying the offending picture and demanding to see the artist. Though the organisers tried to calm the incensed individuals down, they would have none of it, and from there on the matter spiralled out of control.

Banners of the festival were torn down, desks were upturned and windowpanes of the Arts Council were smashed, as the protesters herded the private security guards as well as the handful of police officers that were around, out of the premises, spreading absolute terror amongst the visitors present, senior citizens and women amongst them.

Hurling abuses, the incensed individuals ordered all the visitors to leave the premises immediately, while some threatened press-men not to take pictures of the violent demonstrators.

When PPP leader and special assistant to the Sindh chief minister Waqar Mehdi was contacted by Dawn to inquire if party activists were involved in the violent protest, he said according to his information “sympathisers” had gotten perturbed over the display of the offending picture.

“The sympathisers protested to the Arts Council representatives and the organisers (the Citizens Archive of Pakistan) and asked them to remove the offensive picture. However, they refused. It was a peaceful protest, but there was some tension because of the refusal. People got emotional as the organisers refused to take down the picture.”

When Mr Mehdi was asked if the festival would be allowed to continue, he parried the question, saying instead that controversial art should not be displayed publicly.

“Anything that is religiously or politically controversial should not be displayed. It should be acceptable to all. Even if offensive pictures of Altaf Hussain or Nawaz Sharif were displayed, we would oppose it. Our party believes in freedom of expression, but that does not mean it should be a free-for-all. People’s feelings should not be hurt.”

The PPP leader also denied reports that the protesters resorted to firing at the Arts Council.

In a statement, CAP said that one of the contributions had offended some people, for which they “sincerely apologised”. The organisers of the Shanaakht Festival said that they had removed the offensive contribution (while a PPP leader this reporter spoke to claimed that the offending picture had been taken away by them).

According to a source close to the organisers, CAP has been allowed to continue the festival by the Sindh government.

Before the melee erupted, more positive vibes were being felt on the festival’s opening day. Schoolchildren had visited in the morning, while as dusk fell, a steady stream of visitors was trickling in to enjoy the informal discussions, multi-media presentations, photography exhibitions and art exhibits, along with planned theatre performances, that the festival has brought together.

Head of the University of Karachi’s Visual Studies Department Durriya Kazi moderated a segment in which veteran diplomat and commentator Jamshed Marker and cricket legend Hanif Mohammad reminisced about the golden years of the game.

Hanif Mohammad – dubbed the ‘Little Master’ for his wizardry with the willow – observed that in the years after independence, the players took the field and gave it their best for the country and the game, as opposed to today’s materially-driven cricketers.

Talking about Quaid-i-Azam Mohammad Ali Jinnah’s respect for the law, Jamshed Marker recalled an incident as narrated to him by the Quaid’s ADC Colonel Gul Hasan. He said the Quaid and Miss Jinnah had gone for a drive one evening on what was then known as Drigh Road, sans an armada of security vehicles, accompanied only by Gul Hasan. When the Quaid’s vehicle stopped at a railway crossing, Col Gul Hassan requested the person manning the crossing to open the gate as the Governor General wanted to pass.

When the Quaid got wind of what was transpiring, he called Gul Hassan and chided him for ordering the gate to be opened, observing that the man at the crossing was only doing his duty. Mr Marker observed that this was in stark contrast to later times, when every afsar required a PA to carry his briefcase.

Some absolutely stellar photo exhibitions are also on display at Shanaakht 2009, among them ‘The four faces of Karachi: vintage photography’, featuring classic photos taken by avid collector Lutfullah Khan. Mr Khan took the photos on his many walks across this once peaceful city during the late forties and early fifties.

‘Then and now’ features the work of photographers from different parts of Pakistan, as the varied colours of this country are put on display. ‘Forgotten paradise’ features photos of Kashmir taken between 1930 and 1946 from the collection of Iqbal Akhund and Rashida Hussain. These are marvellous views of the now bleeding vale, taken in more peaceful times, when geo-politics had yet to mar the rustic beauty of this Himalayan Paradise Lost.

‘Apnay Watan ke Saaray Rung Char Soobay Char Ung’ is a great mural exhibition featuring the four provinces of this federation, represented by some of their most famous sons and daughters, as well as cultural symbols.

Another mural depicts the troubled history of Pakistan, from independence up till now, along with all the tumultuous events in between including wars, coups, prominent politicians, people’s power and the ever-present khaki shadow.

If all goes well, Shanaakht will run till April 12.